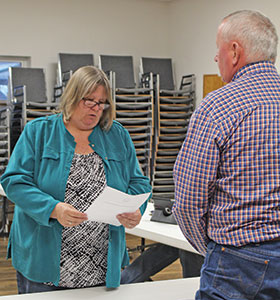 It’s been a year of shifting council seats for the City of Rushford Village. Last summer, Councilor Rich Smith resigned due to a move out of the Village. In September, Roger Knutson was appointed to take his spot. Then, in November, Councilor Chad Rasmussen resigned. At the time, Mayor Gordon Johnson suggested the city bypass a public request for interested persons and look at the other applicants who had applied during Smith’s vacancy.

Then, in December, Johnson resigned from the mayor’s seat. Councilor and Mayor Pro-tem Dennis Overland then took the helm, thus making two open council seats. In January, Bob Hart was appointed to fill Rasmussen’s position. Now, Zoning Board member Rick Ruberg has stepped up to fill Overland’s council seat. Overland is mayor and Mike Ebner, Knutson, Hart, and Ruberg are councilors. Everyone got that? Well, hang on… this November, every one of the five council seats will be up for grabs.

In other news at the March 17 meeting, the council discussed whether or not a policy or protocol is needed when citizens address the council regarding a concern. “I’d like to clarify it,” noted Knuston, speaking to an instance at the February meeting. “It’s easy to get caught up and it puts people on the spot. Sometimes you don’t have all the facts.” Knutson suggested the council let the public speak and let them know it’ll be taken under advisement — nothing else.

“It could be you need to look into things,” he continued. “Let them know we’ll do our due diligence, discuss it and come back to it at the next meeting or we can send you a letter. Diffuse it a bit.”

Hart noted agreement, but suggested only Overland should address citizens as the leader for the city. “I’m not in agreement of us addressing a citizen that comes in. Look at and follow up with letter or discuss at the next meeting. This needs to be addressed or the citizen will walk away thinking we don’t care and we do care.”

City Attorney Joe O’Koren noted a policy could be put in place and noting the city should base their decision on factual findings. Guidelines for citizens addressing the council are in place, but do not detail council response.

“It’s better to not try to solve a problem right then and there, but have a chance to think it through,” added Knutson. “I would like to see us protect ourselves, especially where things can get controversial.” There was no further discussion on the topic.

In regards to planning and zoning, Zoning Administrator Jon Pettit updated the council on his recent walkthrough at Featherstone Farms. The farm has an interim use permit with the city and receives an annual review. This year, owner Jack Heddin has requested changes to the permit in regards to housing at the southern Peterson Farm on Highway 30.

Heddin has requested for allowance of up to 12 H-2 documented workers to live in the farmhouse during the 2020 growing season. The Department of Labor allows such workers to come to the states for a finite time, but the employer must meet state and federal health guidelines, including the provision of suitable safe housing. The department allows for 16 residents per the amount of square footage provided by the house.

Three other employees will be living at farm; two in a granary and one in a cabin. Because of the department’s strict housing standards, all three will be citizens or have a green card. “Planning and Zoning had no issues with it,” stated Pettit. “It’s very well regulated. It’s likely it’ll be just 10 since they’re permitted in groups of five.” The council approved the change to the interim use permit.

City Engineer Derek Olinger, of Bolton & Menk, was also on hand at the meeting to discuss the South Rushford Outfall Grading plans. Determined last year, this year will likely see the first phase of the plan put into action. It involves the grading of two low ditches to help mitigate water flow through south Rushford.

The next steps for phase one are to send plans to private utility companies for any relocation needs, securing of a grading permit from Minnesota Department of Transportation for grading within the right-of-way, and the acquisition of construction easements from private landowners.

“We’re not increasing the total volume of water. What will change is the rate at which water can get there,” noted Olinger. “The critical path will be securing easements.” Early construction estimates are $100,000 or less.

“It’s important to note, this is phase one. We expect things to be better, but this is not the end solution,” he cautioned. “This is still going to be a rural drainage system and we’re relying on flat ditches and flat culverts. There are certain events out there where it doesn’t function as you want it to. It’s important to know we’re making efforts to make things better, but it’s not the full solution.”

The rock bid request was approved by the council without changes, even though discussion included the option to put a penalty in place if the rock is not delivered and spread on roads prior to June 15. Last year, the city ran into major problems when the area rock supply was diminished and none could be found for city roads. It’s anticipated that during normal weather conditions, the rock will be done by the cutoff date.

The south Rushford drain pump is one of two in the area and is being tripped by ongoing issues. The other pump was replaced recently and Public Works Supervisor Travis Scheck worries the other is now failing. NES has been out to look at the pump and has recommended the pumps be set up parallel and to stagger one another. The city will have a local plumbing company look at the pump and will have NES give an estimate on the cost to stagger the pumps.

Scheck continues to make progress on the job description and needs for a part-time, on-call maintenance worker. In the meantime, the city will check with Arendahl Township if extra labor or machinery is needed. The city and the township signed a mutual aid agreement last year.

The next regularly scheduled meeting is Tuesday, April 7, at 7:30 p.m., at the Village Hall. The public is encouraged to attend if statewide precautionary measures for COVID-19 have been lifted.