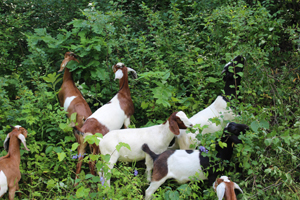 Living in arguably one of the most breathtaking natural areas, we often see the lush rolling hills, dense forests, and golden prairies at face value. We forget that they have been roamed, managed by farm and land owners, and altered by years of interaction by humans. A shift in balance between soil, land, plant, and animal has resulted in reduction of quality and sustainability and introduction of noxious vegetation, pest, and deep land scarring has shifted. But, the balance is being restored.

Driftless Goat Company, in rural Lanesboro, can attest to this firsthand. “We have a business that is attractive to a diverse group of people: farmers, environmentalists, academics, artists, outdoors enthusiasts. There are a lot of ecological challenges and it’s exciting that agriculture is providing a solution,” says company co-founder Peter Ruen.

“In America, we often hear that agriculture is the problem. Agriculture is part of the solution. Fillmore County… the farms and farmers here are a different breed. It’s one of the cleanest counties in the country.”

“The story is the goats,” he continues. In 2017, Ruen and wife Cynthia, along with neighbors Jim and Debbie Rand, started Driftless Goat Company with two goats and a vision for responsible land management to steward the ever-changing environment. The company provides managed goat grazing not as a replacement to other methods, but as a viable alternative.

Becoming more and more common, in both rural and urban areas, the grazing of goats provides a reduction in usage of mechanical vegetative removal, whether mowing, cutting, or manually removing weeds, using chemical sprays, and other repetitive management strategies. Working with nature, rather than against it, grazing is effective in flood and fire mitigation, land erosion/stabilization, removal of noxious and invasive vegetation, and even pest reduction. Costs related to implementing goat-grazing operations are also impressive, when compared to the time, cost, and potential environmental impact of mechanical, chemical, or manual removal.

There is a vast number of lesser seen benefits also provided by the goats. Ruen is adamant about the science that shows the land’s response to stresses and both mineral and microbial fluctuations plays out in appearance of various changes, such as the influx of weeds, on the landscape. Alterations to the minute details of the soil and vegetation have  long-lasting impact. Goats ingest various vegetative matter, digest any viable seeds and disperse the remnants in nutrient-rich, pelleted manure, all while aerating the soil with their hooves, opening up air and light flow, giving native plants a boost and adding to the overall health of the area. While we may only see the obvious control measures of a cleaned up area, the land is being rejuvenated and balanced through a highly effective recycling process.

The task is incredibly suited to  the goats. Intelligent, they instinctively avoid the few species of vegetation they cannot consume, train well to electric fences, and come running to their goatherd’s call (each with his/her own way of calling their herd) when it’s time to move. Natural browsers, meaning they prefer woody stems and items of often unpalatable nature over grasses, goats are designed for this purpose and they’re enthusiastic about their work. Sure-footed hooves and bodies can climb and maneuver their way through the densest of areas, steepest grades, and obstacle-laden work sites. Their prehensile lip is sensitive enough to pick individual pieces of grain from ration, but their digestive system can withstand the digestion of many things either toxic or abrasive to humans and other livestock. Case in point, thistle, wild parsnip, and prickly ash invading Fillmore County prairie and woodlots. Favorites of the goats, the plants are nibbled down, seeds and all, the stems and trunks often stripped bare, and the roots trampled, stressing the plant into submission. With subsequent grazing, or even one time, the desirable, diverse vegetation is allowed to thrive, beating out the more invasive species.

There’s another obvious benefit to goat grazing. “There’s a joy in watching the goats. They’re cute!” Ruen laughs. He believes this draw to observe the spirited goats provides added benefits to humans and our link to agriculture.

“We’re still building, but the health and well-being of the herd is our primary concern. Out of that, we’re getting a grazing powerhouse,” enthuses Ruen, “With this lush ecosystem, how do we maintain it? Maybe livestock is not the problem. Maybe animals are part of how humans have cared for the earth and their families forever. We’re taking care of problems, but there are ancillary benefits: the soil and land health, plant diversity… human to animal interaction.”

While Peter spent summers at his family’s farm, helping with various aspects, he fully acknowledges that he came from an urban environment, eventually settling in New York City with Cynthia and their two children, working on Broadway as a Local One StageHand. In 2013, when an accident in Minnesota left Peter immobile for roughly six months, the family was forced to make some quick decisions. “We decided to stay put,” he chuckles. “We’re living outside our experiences right now. It takes a lot of willpower. But, the fact is, I get up every morning and I’m so motivated.”

Ruen also works at Duschee Hills Dairy. While he’s spent hundreds of hours on other people’s farms, it’s been a shift to provide and manage his own animals. Although agricultural resources, friends, and family have been a huge asset, it requires the company to think on their feet and really take stock of what works and what doesn’t. He points out there are curious parallels between goat grazing and Broadway. “It all has a show quality to it, doesn’t it? We bring in the goats – the show – in our theatre and they perform. Like on broadway, it’s routine. But, sometimes things go differently. There’s always a place in agriculture for creativity.”

Driftless Goat Company’s 21 goats certainly are the show. All Boer or Boer/Nubian cross, roughly a quarter of the herd is comprised of does (females). Beginning with a pair of goats, Brownie and CoCo, and a patch of work at the Thompson House Bed & Breakfast, in Lanesboro, the company has grown and stayed busy with jobs of various sizes around the county and the interest doesn’t appear to be slowing. While there are other companies around, several are satellite operations, with larger companies handling operations and subcontracting with goat herds in targeted areas. Driftless Goat Company wanted a more local option for land owners looking for an alternative.

The goats have been utilized to graze private, rural properties and additional  in-city parcels. Working with the City of Lanesboro and its Planning and Zoning Commission, the company was able to help draft an ordinance, based off Rushford and Olmsted County ordinances, to accommodate the permitting of temporary goat-grazing work sites. While  large municipalities, such as Rochester and Minneapolis are embracing livestock and out-of-the-box solutions, rural communities can be stricter on livestock policies and ordinances.