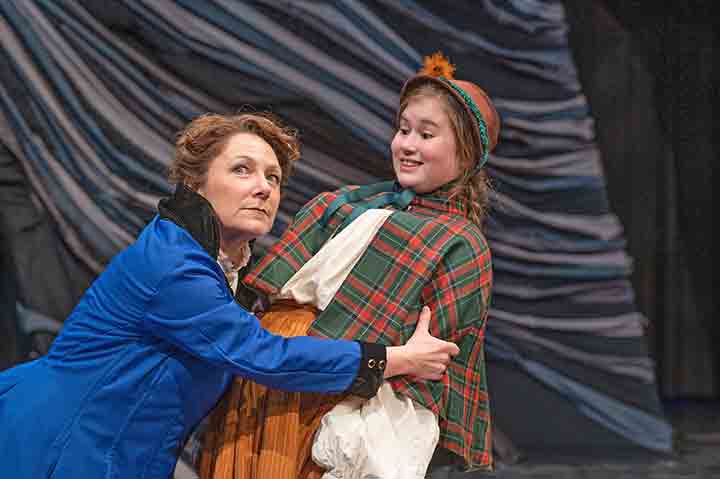 Sweeney became interested in acting while growing up in Philadelphia, Penn., attended college in Baltimore, Md., and graduate school in Tucson, Ariz., where she received her M.F.A. in acting.  After moving back to Minnesota she auditioned for the Commonweal Theatre Company in 2001 and was brought in as a seasonal actor.  In 2002 she was hired on to be a part-time member of the ensemble and she never looked back. Commonweal Theatre Company and Lanesboro became her home.

“This is my 21st season with the theatre,” stated Sweeney.  As well as being a dynamic and captivating actor with the Commonweal, Sweeney has additional roles.  “I have two administrative titles.  One is the associate artistic director and the other is director of external relations.  So I am in charge of the entire marketing team and I serve on the leadership committee,” she explained.

When asked how it came about that she is playing Scrooge, Sweeney responded, “This is kind of a dream role for me.  People will ask what is the one role you wish could play – I have been in so many productions of The Christmas Carol, at least three or four – that I love the story so much and I would always say I would love to play Scrooge.”

“I will never forget one day, we were sitting drinking coffee on our porch, and I said do you think a woman could be Scrooge?  And Hal (her husband, and producing artistic director of Commonweal) said, “Well, if it’s anywhere, it’s going to be here where our audiences know us and trust us and accept us.”

Sweeney continued, “I was talking with Philip Muehe, who used to be at the Commonweal, he’s moved on to become the managing director of the Rochester Repertory Theatre. He’s been a really close artistic collaborator of mine.  He’s been my assistant director many times, we just have a really strong artistic relationship. We were talking about it one day and we were kind of just kicking it around, and he thought we could do it.”

“And simultaneously, American Theatre Magazine, which is the trade magazine for American theatre, published an issue and the cover image was a female Scrooge and it blew my mind, it was such a strong and striking cover. I read the article and I happen to have friends who are connected with the woman who played it, and we talked about it.  Philip thought we should just do it,” said Sweeney.

“Philip wrote an adaptation, and last year was my 20th season, so it was supposed to be last year, and then we moved it to this year. Then Philip got another position, so we handed the project over to Craig Johnson, who is a longtime friend of the theatre and all of us here.  He did some further revisions on the adaptation, and here we are,” she stated.

“This is a complete re-envisioning of the script to accommodate a female Scrooge and female ghosts,” explained Sweeney.

With such an iconic role, you may wonder what Sweeney’s favorite part of playing Scrooge is.  “It’s the same as watching it; it’s the transformation.  That realization that you can change, and watching someone transform.  You really do run through the whole gamut of human emotions in this show,” explained Sweeney.

When asked if the rest of the cast has been supportive of her playing a non-traditional role Sweeney answered, “Oh yes.  Everyone has really enjoyed it, I think.  I think people are hearing the story differently because it’s such a well-known holiday story… this gives you an opportunity to really look at it through a completely different lens,” which is something new and exciting for those attending A Christmas Carol at the Commonweal.

“It’s just a wonderful way to re-envision.  The messages remain the same, but you get to hear it differently.”

“It leans into the ghost story quality.  The set and the lights and the sound are very ghostly and it’s quite a stunning production to look at,” Sweeney explained.