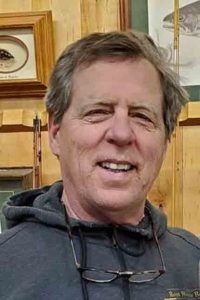 Steve was born November 11, 1954, in Niagara Falls, N.Y., and lived in Lewiston, N.Y., for many years. He began fishing as a boy, and learned fly fishing from his father, who was an avid fly fisherman, after the family moved to the Adirondacks a few years later. In the 1970s, Steve moved to Colorado to attend college, where he began working in the building industry, and met his wife, Vicki McKinney.

They moved to the Twin Cities’ western suburbs in 1986 to raise a family. He won respect in the Twin Cities as an artisan carpenter, adding beauty to fine homes in Minnesota and elsewhere. Steve was regularly seen on the Twin Cities-based television show “Hometime,” and he worked with famed architect Sarah Susanka, prominent builders Dahle Bros, Landschute Group and many others. His craftsmanship graced many homes chosen for the Parade of Homes.

His love of fly fishing and woodworking dovetailed into another pursuit: rod building. He studied how craftsmen in the 19th and 20th centuries made six-sided fly rods from precision-milled bamboo strips. One of his mentors was rod-maker and writer Hoagy Carmichael. They developed a great friendship and were able to fish together on Canadian salmon rivers.

At 60, Steve left the construction industry to pursue rod making. He and his wife Vicki purchased a historic storefront in Lanesboro, Minn., moved into its upstairs apartment, and opened Root River Rod Co. on the ground floor in 2017. The fly-fishing store, now operated by family members, sells flies and fishing gear, and offers guided fishing on southeast Minnesota streams.

Steve often was the smiling face greeting anglers as they walked into the fly shop. He was known for his kindness, generosity, integrity and support for trout stream conservation. He built and donated bamboo rods as fundraising items for Minnesota Trout Unlimited chapters, including a rod that will be raffled by the Rochester-area Hiawatha Chapter in coming months.

His rod-building workshop –set up in the back of the store – drew anglers from around the country who wanted to see Steve’s work or to discuss the merits of antique rods that Steve also collected and sold. He once told a reporter that decades from now, anglers perhaps would be discussing and casting fly rods that he built.

“I hope they say, ‘This guy really knew what he was doing,’” he told the Rochester Post-Bulletin.

He loved everything to do with fishing, including angling history and fly tying. He invented a fly called the Metolius Caddis, named after an Oregon river. He traveled to fish famous waters in Oregon, Montana, Alaska, Grand Cayman, Florida Keys, Belize and Canada’s Gaspé Peninsula. He also loved skiing, scuba diving, skateboarding and wakeboarding. In 2014 he climbed Mount Kilimanjaro in Africa. He was a true renaissance man who excelled at anything he put his mind to.

He was preceded in death by his son Brady Sobieniak, and his father Mathew Sobieniak.

Services will be held October 8 from 2-5 p.m. at Camp Creek Farm, 21587 US-52, Preston, Minn. Online condolences are welcome at rileyfuneralhomes.com.