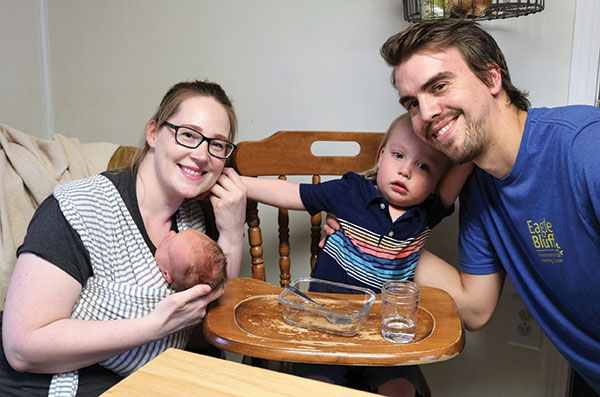 Sometimes things don’t work out as planned.  Thankfully Joe and Sjeila Goetzke of Lanesboro, Minn., were up for the challenge when Sjeila began having contractions on April 29, 2022; a few days before her due date of May 4.

The couple were married in 2012 and were blessed with their first child, Amos, in 2021. They are a busy family, with Joe employed by Eagle Bluff Environmental Learning Center and Sjeila a math coach and librarian for Fillmore Central Schools.  However, everything else in their life had to be put to the wayside when their second child decided to make a rather quick appearance.

Sjeila recalled, “I was just feeling a little weird, so I went upstairs to lay down and I decided I would download one of those contraction timers on my phone.

“I got a contraction and I timed it, so it was 6:20 p.m. when I got my first contraction and it seemed pretty rough, but at the same time, I never had a normal labor with Amos so I thought, I guess this is just how it goes.”

Things continued to progress quickly, with contractions going from 10 minutes, to seven minutes, to four minutes apart.  That is when the couple knew this was not a false alarm.

“After the one that was four minutes, I basically was in one long contraction,” Sjeila explained.

She asked Joe to call his parents, Chris and Patti Goetzke, as his mom had planned on being present for the birth.

“When my sister-in-law helped Sheila out to the car, because I had the car running, I asked her how far apart the contractions were at that point, and she said they were two minutes and I thought uh-oh,” stated Joe. The couple left the house about 7:15-7:30 p.m. to get to the hospital. They headed out on Cty. Rd. 8, hoping they still had time to make it.

“At some point, through the contraction pains she said, ‘He’s coming,’ and I was skeptical at first because of how fast everything was going. I thought maybe this is just really bad pains for whatever reason and we hopefully can still make it.  But then not too long after that she said, ‘You gotta pull over, he’s coming now!” explained Joe.

As they traveled on Cty Rd. 8 from Lanesboro, toward Fountain, on their way to the hospital in Rochester, Minn., there were not very many safe spots to pull over and stop, so Joe was on the phone with 911 explaining the situation until they could find a place to stop. Eventually, Joe saw a gravel driveway that was a possible place to stop, so he pulled over there.

“I opened the car door and kind of climbed out of the car and then maybe two minutes later he was born,” explained Sjeila.

Francis Joseph Goetzke, lovingly called “Frankie,” was born at 7:26 p.m. weighing 8 lb 2 oz., and was 20 inches long. The birth time is based on when the couple called 911 as they didn’t know the exact time he was born.

Things moved so quickly that the time from when contractions started until he was born was one hour and six minutes.

“After he came out, I was wearing a hoodie sweatshirt, so I unzipped that, we wrapped Frankie in the sweatshirt because it was chilly out,” states Sjeila.

Chief Blaise Sass from the Preston Police Department and Deputy Gideon Prudoehl arrived a minute or two after Frankie was born and they attended to mother and baby, giving Sjeila a blanket to wrap around her and the baby, until the Preston Ambulance arrived on scene shortly thereafter.

Delivering your own child is not something that most people expect to do but Joe took it all in stride given he really didn’t have any other choice.  “I can say that’s something I never thought in a million years I would ever do,” he shared.

“Thankfully it just happened super quick and it was relatively uncomplicated as far as deliveries go,” stated Joe. “I had no time to think.

Sjeila agreed, noting, “The fact that this was so fast and didn’t really give us time to think was nice.  It started and it was done and that was that,”

Now a family of four, the Goetzkes have settled in at home.  Frankie is a content little boy and Amos is an awesome big brother!

Joe gratefully noted, “We want to give a shout out to Chief Sass and Deputy Prudoehl, and also to Preston Ambulance who took really good care of us.  We are thankful they were able to be there for us and that we have those great services in our community.”