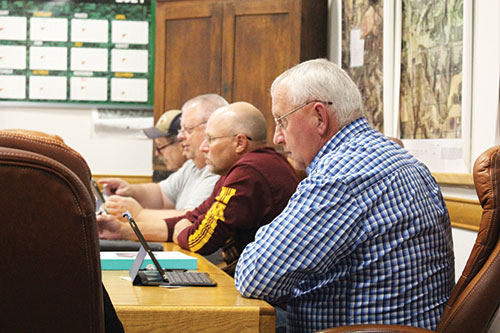 The City of Rushford Village was recently approached by Semcac (South East Minnesota Citizens Action Council) regarding a Water and Sewer Assistance Program. The program is optional for cities and works to address emergency needs.

“It would help any resident in the water/sewer district that are behind in their payments,” noted City Clerk Mary Miner at the October 5 meeting. “They would have to apply and Semcac would determine if they are eligible.”

City Treasurer Judy Graham stated that the city does have roughly a dozen properties that are behind regularly. “It’s the same ones all the time. They pay and get caught up, pay and get caught up. None of them are a disaster.” Graham further clarified that most of the dozen let their billing go for three months and get caught up when they receive a shut-off notice. The city charges $100 additional to reconnect services once shut off. There is no cold-weather shut-off prevention for water and sewer services unless a property has water heat.

Councilor Robert Hart replied first being in favor of helping citizens. Councilor Mike Ebner agreed. “I would hate for us not to sign up for a program that will help our residents,” he said. There is no additional workload to city staff for program participation with Semcac leading it. According to Graham, the state has more than $14 million set aside for these needs.

The only noted downside to program participation, which begins October 1, is that it would delay payments to the city. “Do we have standard policy for those that don’t pay? We have to be consistent,” added Ebner.

The city does have a policy in place for past-due bills, which inevitably sees service shut off and past-due amounts ceritifed to the county for addition to property tax rolls. Starting late in the year may put a damper on this process. “We’re also running into year end,” said Graham. “Do we hold up all of them that are due to see if Semcac will pay? Otherwise we’ll have to wait another year. If it wasn’t the same ones all the time, I’d feel differently.” Those not paid by year end will be certiifed to the county.

The council unanimously approved participation in the program. Information about it will be included in the November billing. Those not paid by the year’s end will be certifed to the county. Citizens in the water/sewer district wanting to see if they’re eligible will need to contact Semcac directly.

The council opted to have a continuation of the meeting, rather than adjourn, to allow for members of the council to attend the Rushford Fire Department mill rate meeting October 18. Mayor Overland, Clerk Miner, and Councilors Ebner and Rick Ruberg are planning on attending. This is a contract year, so the council will need to review and ultimately approve a new contract for fire protection services.

The council also briefly discussed cracksealing on Cooperative Way. According to Miner, there is conflicting information on whether or not cracksealing on concrete is effective. Mayor Overland and engineer Derek Olinger are looking into it. The last time the road was looked over Olinger suggested the city keep an eye on it, but said it looked good.

The council meeting will contiue Tuesday, October 19, at 7 p.m., at the Village Hall. It is open to the public. As a reminder, there will be no meeting November 2, as special elections for Rushford-Peterson School District will be held at the Village Hall that night.