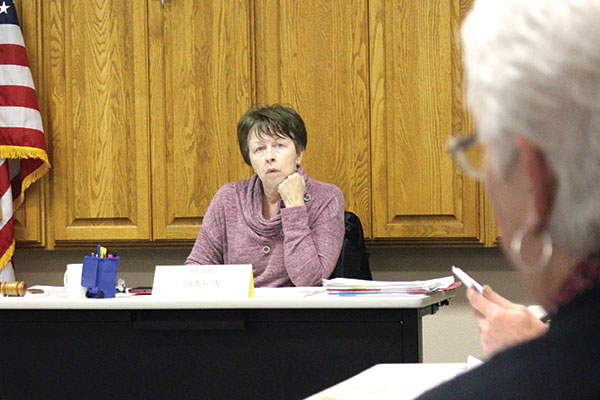 The last meeting of 2021 (December 27)  for the Rushford Council was largely a follow-up on the city’s final levy and the annual performance review for City Administrator Tony Chladek. This was his fifth year with the city.

Mayor Terri Benson kicked off the discussion noting she’d compiled the comments and concerns from the individual performance reviews done by herself and Councilors Andrew Linder, Jim O’Donnell, Sally Ryman, and Leigh Volkmann. “I took a look at where opportunities were and where areas needing critical improvement were,” said Benson. Chladek sought direction on suggestions for better Citizen Relations, which Benson had stated was identified as the most critical area for improvement.

“I find it concerning that I’ll mention the city administrator and not only do they not know who it is, but they don’t even know we have one. Communication is big,” said Ryman.

Chladek earned his highest marks and most improvement in the area of Individual Characteristics (“diligent & thorough, enthusiasm & cooperation, adapts”). The area has been a strong point for Chladek, as has been Professional Skills (“knowledge of government, anticipates problems, willingness to try new things”). Policy Execution (“supports actions of governing body; supports & enforces local laws, policies”) also saw improvement for the year.

Marks for Reporting (“provides regular info and reports concerning matters of importance”) and Supervision (“supports department heads; encourages teamwork”) fell slightly, but Chladek’s work continues to be average to above average in those areas. Staffing (“applies appropriate levels of supervision; promotes training & development”) had the biggest drop, from excellent to below average, from one councilor, but was steady otherwise.

Benson, Ryman, and Volkmann all suggested a presence among the community, including businesses and individuals, should be an area of concentration. “What I’d like to see is reaching out to business owners, not to dig up any serious concerns, but to show that the city is here and willing to listen. It’s nice to know the city cares, I guess,” said Volkmann.

The liaison-role for the city included suggestions such as visiting businesses at varying times and improving the city’s website and overall communication with the public. O’Donnell pointed out that a lot of that normal one-on-one contact was hindered during the last two years of COVID pancdemic.

Benson and Ryman stressed that an improved website would be a good tool for outreach. “One of the ways you measure how good the navigation is on a site is the number of clicks to get to what you’re looking for. It’s not that easy to navigate,” said Ryman. While it was noted the city has used Facebook well to communicate, not everyone is on social media.

“There’s a big group we’re missing. I think there are some ways it could be better used,” noted Benson. According to Pew Research, only 69% of adult Americans use Facebook, with all other social media falling below 40% usage, with the exception of YouTube. What’s more, less than 50% of adults over 65 use social media at all, leaving a wide gap in social media communication disparities. Based on 2019 demographic data, that’s more than 33% of Rushford’s adult population.

“It’s good, but it doesn’t reach all the audience. There are so many ways to communicate now and everybody is using different things. If we can figure out what the majority are using, we would be a lot better,” shared Councilor Ryman.

Benson also suggested that an improved website could serve as a useful communication tool for not just city hall, but the police and fire department, as well as the ambulance service.

“My big concern is that if you’re running into people asking about programs or whatever, please have them contact city hall and give us a chance to answer something,” asked Chladek. “Don’t ever feel like we’re not there to support you.” He will take the feedback and review it further, following up with individual councilors where needed.

In other news, the city approved the final property tax levy for 2021 at $1,017,000, a 0% increase over 2021. There were no changes to the proposed budget and the final levy is unchanged from the preliminary tax proposal this past September.

The December 15 storm that ravaged Minnestoa caused some damage to the city which will be submitted as insurance claims. They included a downed street light, shingle damage, and possibly the water tower. At the December 27 council meeting, City Clerk Kathy Zacher explained that electrical components of the tower were hit and that the tower is currently emptied for further examination.

“We’ll know more soon. We’re not going to run out of water or anything,” stated Zacher.

“We have plenty of other reserve areas,” ensured Mayor Terri Benson.

“It will be on our agenda during the first of the year to see how was want to handle it,” added Zacher.

In related news, the city has received its liability dividend payout from the League of Minnesota Cities and the dividend was noted as “quite large” this time around. The amount is $5,577. Recent claims won’t have an effect on the dividend.

The council also authorized payment to Generation X Construction for the bulk of the new canoe launch access road. The payment was $56,991 of the $78,110 total cost.

The next regularly scheduled council meeting is Monday, January 10, at 6:30 p.m., at city hall. The meeting is open to the public.