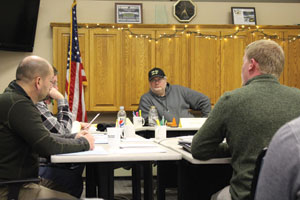 In an age of ever-changing products and concerns, the City of Rushford is considering revamping its 1997 tobacco ordinance to include Electronic Nicotine Systems (ENS), or e-devices. The changes would clarify definitions and regulations pertaining to use and sale. A public hearing on the issue was held at the Monday, January 28 meeting, with Rushford-Peterson Middle/High School Principal Jake Timm and Fillmore County Public Health Educator Brenda Pohlman in attendance. R-P Schools, via Timm, was the requesting party for the city to review its ordinance, according to City Administrator Tony Chladek.

Pohlman noted that the vapor within the devices is nicotine vapor and its addictive component is cause for concern, as is the size, flavoring, and marketing of the devices when it comes to youth. Several devices of varying size and use were shown and discussed. Pohlmann indicated they range in flavor additives from mint to mango and everything in between and do so legally. Due to their release post nicotine lawsuit settlements, they are exempt from flavoring rules. Additionally, due to their design, there is real concern from both health officials and law enforcement about usage of illegal substances, such as marijuana or fentanyl, with the refillable devices.

“It’s cheaper than traditional tobacco products and there’s a significant amount of product available in the county,” said Pohlman. She further indicated an increase in the number of youth using the devices and noted it should not be considered a healthy alternative to conventional tobacco products. The devices can be exceedingly small and discreet, with some even sized to click into the ends of sweatshirt hood strings, hats, and backpacks. Adapting kits to sew strings into anything are also available.

“Thank you for reviewing it,” said Timm. “It’s sweeping the nation. It’s hitting more and more kids. It’s an epidemic.” He acknowledged changing the ordinance won’t make kids quit, but insisted it could make it more difficult for them to purchase it, penalties more severe, and hopefully, those would lead to less usage. “The more we can do together, the better. We have a school of age three to 18. Anything we can do to get it out of the building is good. We’ve caught 10 kids this year and there’s probably three to four times as many doing it.” Timm further indicated that by the city and school district working together it shows they are serious about the problem.

Currently, the school handles the issue in-house. Should the city modify the ordinance, students could be ticketed by law enforcement if caught, in addition to 10 hours of community service time and participation in an educational course. Subsequent offenses would see steeper penalties.

Tobacco usage onset is typically 11-18, according to Pohlman, but the awareness is there. “We have third, fourth, and fifth grade students that can talk the lingo and know what it is,” noted Timm.

“It’s really good that you’re being proactive and trying to protect the youth,” added Pohlman. “It’s a multiple-phase effort.”

Further discussion included amending the tobacco purchase age within the city to 21. The council appeared to have little problem with it, based on councilor statements, but they would like to hear from businesses first on how this might affect them. It was noted that city businesses are doing an excellent job of training staff and carding minors.

“You can pursue it in the draft,” noted Pohlman. “It can be the Cadillac, the best of best, and you can reduce from there.”

The  recommendations to consider in the ordinance included federal rules for packaging and simplified definitions that would help head off new products coming onto marketplace. Advanced policies will hit at the minimum age, licensing fee, and restriction of flavored products. Alterations of penalties may be worked out with additional information from the Rushford Police Department, Fillmore County Sheriff’s Department, and Fillmore County Law Center. The law center has offered to draft a new ordinance, at no cost, for the city. From there, the city can add or remove items before bringing the revised ordinance back for another public hearing. If passed, Rushford would be one of the first in the county to address the growing issues.

It’s expected that the law center could have a draft to the city by the February 25 meeting. At that time another public hearing could be held, making the ordianance “good to go” by March.

In other news, the city is making further strides prepping for the 2019 Street Improvement Project on East Grove Street, Walnut Street, and North Burr Oak Street, as well as a smaller Lamplighter Lane project. Derek Olinger, of Bolton & Menk, was on hand to discuss the project standings, but noted there were no big scope changes. There is an interior ponding area west of South Burr Oak Street that may be addressed by the project, should the Army Corps of Engineers give their approval. If completed, the cost is expected to be relatively unchanged, according to Olinger.

During the 2016 project, plans were constructed for the city to gain easements over private properties for the purpose of storm water drainage. Agreements for the easement eventually fell apart and that part of the project did not occur. A ponding area was excavated, but the Corps eventually denied the engineering part of that analysis, due to possible piping, or erosion, under the levee. Should the city get new Corps approval, the contractor will be asked to take excavated fill from the 2019 project and fill the ponding area on South Burr Oak. “The contractor no longer needs to haul from out of town and can take from a couple blocks away,” said Olinger. “I would expect a decrease in price with typical rates. It’s not unreasonable to say it’s going to be about a wash.”

The sewer lines in the area were televised and did show excessive debris and breaks. The current six-inch pipe is clay and undersized. The breakage has led to Infiltration and Inflow problems for the city’s wastewater treatment plant. For that reason, both the utility and streets of East Grove Street, Walnut Street, and North Burr Oak Street will be done. The council approved the plan unanimously.

In regards to discussion over a recent Minnesota Department of Transportation speed study, the city has received word from the R-P School District that it will share the cost of the estimated $7,000 study. “By law, they need an engineering study to back it up,” added Olinger. “There are no concerns. What we’re expecting to get out of this report is how far out speed zone goes and what else is needed (signage, etc.).” The council unanimously approved the study application.

The city is also proceeding with a Department of Natural Resources Local Trails Connection Grant, along with the school district. The cost of the grant application is $1,750, but that may be reduced if previous application information can be utilized.

Cooperative Safe Routes to School grant applications failed three times, but it appears this time, the connectivity piece might clinch it for the city and school. The trail, which would run from the east Creekside Park levee to the new school parking area would run behind homes on Eiken Drive. Easements would be provided by the school to the city and the city would own and maintain the trail section.

The council unanimously approved the fee schedule for 2019. No changes were made, except to increase the annual compost site fee to $10 per household. There is currently a $4,380 shortfall every year with operation of the site and the increase will decrease that amount by half.

The next regularly scheduled council meeting is Monday, February 25, at 6:30 p.m., at city hall. The public is encouraged to attend.