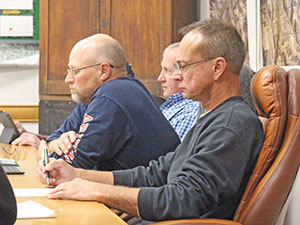 The first phase of drainage mitigation in South Rushford is now complete, according to City Engineer Derek Olinger, of Bolton & Menk, who informed the Rushford Village council at their November 16 meeting. The project included addressing outfall grading in two areas. Property easements were required for the work north of the intersection of Sherwood Street and Highway 43 and north of the intersection of Meadow Lane and Highway 16. The broadly-sloped area should help ease ongoing drainage and backflow issues. The work was estimated at $57,035. The council approved payment to Griffin Construction in the amount of $55,272.

Olinger was in attendance and provided some background on the issues that came to the forefront after excessive flooding in the winter of 2018 and 2019. He also requested, if the city is planning on doing additional phases, preliminary work begins soon. “When does the council see moving forward with the remainder of these projects? Just from a planning perspective, there are easements to obtain before construction could occur and it takes time to secure them. It’s a minimum year-long planning. I’d think about getting started with the preliminary portions fairly soon,” urged Olinger.

High-level estimates for the entirety of the work, following an in-depth drainage study, were  $550,000-600,000. “If we move forward, it wouldn’t necessarily mean moving forward with everything. We’d work to refine costs,” added Olinger. Steps to further mitigating the issues included deepening and widening of ditches along driveway areas, particularly along Sherwood and Whitmore Streets, to help convey water. Some areas may need urban section streets, with curb, gutter, and storm sewer.

“Correct me if I’m wrong, but I think our intention was to hold off for a year once the culvert was put under 43… we’d wait and see what transpired with the drainage. The next stage would be up along the west side, but we were holding off a year,” said Councilor Mike Ebner, serving as Acting Mayor in the absence of Mayor Dennis Overland. “Our intention was to keep working back up the hill to see if it eliminated the issues.”

“I agree,” added Councilor Roger Knutson. “Let’s see what actually happens with larger culvert and drainage areas. We might see a huge improvement without having to do all this. No one wants to spend a half million unless we absolutely have to.”

Councilor Bob Hart questioned how the city would fund such an undertaking. It was clarified that to do the entire project the city would absolutely have to bond. Over time, however, through phases, the city can pay for sections through funds set aside. “The plan was never set in stone. Let’s wait and see. We have an issue, but let’s do a little and see what happens,” said Hart.

Public Works Supervisor Trenten Chiglo asked whether deepening ditches would add to the drainage problems. “At the intersection of Goodrich and Whitmore it’ll be a great deal lower than its current configuration to improve positive flow. At least you wouldn’t have ditches that have backflow, which is the current situation,” replied Olinger.

Knutson asked whether any potential development of farmland to the west of South Rushford would compound problems. Olinger noted the ditching should be able to carry extra load, but that any development would need to be structured in a way that wouldn’t have adverse effects. “They can’t increase the rate of flow with any development. It’s well within the city’s power to control,” responded Olinger.

The issue was tabled for further review and future discussion. It was noted that MnDOT is planning on doing work on Highway 43 in 2022 and will be replacing a problem culvert that was part of the project.

“This is only on campground definition,” clarified Zoning Administrator Jon Pettit. “We always went by the state’s definition. They’re asking the city council to approve conforming to Fillmore County’s new definition.”

The county has also requested that the city submit a listing of all properties with utility billing that is 60 days past due, for the purpose of adding the past due amounts to property tax rolls. There are currently four Rushford Village properties in that position. City Treasurer Judy Graham noted that up to three of them may be able to qualify for funding through a utilities assistance program.

“In case they do not, we still have to send these to the county,” said Graham. “If they do apply and are accepted to the program, through the end of the year, we can notify the county to have them removed.” The four properties will be contacted and the city will wait until November 20 to certify past-due utilities to the county.

In other news, a representative from the state will meet with Graham, Chiglo, Public Works employee Preston Lacy, and City Clerk Mary Miner November 18. The individual interviews are part of a State Job Match Description and Grade/Compensation Study. “It’ll be interesting to see what he has to say,” noted Miner.

The next regularly scheduled council meeting is Tuesday, December 7, at 7 p.m., at city hall. The Truth In Taxation meeting is slated for the same evening at 7:30 p.m. Both meetings are open to the public.