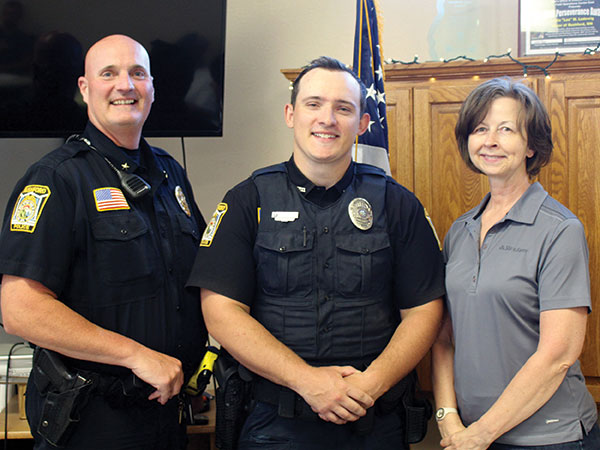 At the July 11 meeting, the Rushford City Council unanimously approved the hiring of Cale Stensgard for the open full-time officer position, replacing former officer Davin Daveau, who resigned in June. Stensgard has served the city as a part-time officer since September 2019.

“It is my recommendation to hire Stensgard as he has proven to be a good employee and I believe he will make a fine addition to our department,” noted Rushford Police Chief Adam Eide in his letter to the council. “Stensgard is familiar with this community and our department and will allow us to continue serving the public with consistent, professional service without much additional training or familiarization.”

“I’ve known Cale all his life,” continued Eide, speaking to the council directly. “It’s exciting for me to be part of the start of the beginning of his career. I expect great things from him.”

This brings the department to three full-time officers, including Eide, Sergeant Nate Klinkski, and Stensgard and one part-time officer, Thomas Mensing.

The council also approved its eighth Residential Rehabilitation loan. The program is a partnership with the city, Economic Development Authority, and SEMCAC (South East Minnesota Citizens Actions Council) and all applicants are vetted by SEMCAC. It functions as a sort of gap funding for residents seeking to make home improvements but cannot secure a loan elsewhere and do not qualify for other assistance programs. The current loan, for 505 West Stevens Avenue, is in the amount of $20,078.

“Our pool of money is not endless, of course. Do we know where that’s at?” asked Councilor Jim O’Donnell. The total approved since the start of the program is $167,551 and the program was initially approved for up to $300,000 in loans. According to City Clerk Kathy Zacher, Semcac is utilizing state grant funding first. The terms of the loans, filed as a lien on property tax rolls, do not require them to be paid back until the home is sold. “The revolving part could be very slow, but I like the program. It’s increasing value and generating more taxes” added O’Donnell. The program will be reviewed this fall to see if it should be extended.

“This opened the door a little bit,” said Mayor Terri Benson. “It’s good to see improvements to our community.”

Donations in the amount of $1,400 were also approved. The donations come from American Legion Post 94, Rushford-Peterson Booster Club, Valley Crest Riders Snowmobile Club, and Rushford Lions Club and will be utilized for the Rushford Music Series. The series kicks off in August.

Lastly, the council unanimously approved a resolution allowing for a Minnesota Department of Transportation Agreement for Federal Airport Expense Reimbursement to be carried out. The funds are available through the American Rescue Plan and the Federal Aviation Administration provides oversight of all eligible expenses.

“It’s one of those extra pots of money,” explained Zacher. “When we file our normal maintenance costs, if we go over, we have to eat the difference. With this, we might get reimbursed on some of those operating expenses.

Items also touched on during the meeting included a letter of support from the city council for efforts of the Rushford Area Historical Society (RAHS) in applying for grant funding. The purpose of the funding is for structural improvements to the Southern Minnesota Depot which serves as a community museum and office space for the Rushford Peterson Valley Chamber of Commerce.

“Even though routine maintenance has been on-going, the age of the structure and the damages caused by the 2007 flood event in our city has taken its toll on the building,” stated the letter. “The Depot building is an integral part of the historical fabric of our community. The building serves as an important stop along the Root River State Bike Trail, bringing many visitors to our area. For these reasons, the city has provided both monetary and logistic support for the endeavors.”

An update on the Highway 30/West Stevens Avenue was also provided. The project shifted to Phase 2, including the west end, including residential area reconstruction, July 11. Access to the city via Stevens Avenue will no longer be available.

The next regularly scheduled council meeting is Monday, July 25, at 6:30 p.m., at city hall. The public is encouraged to attend.