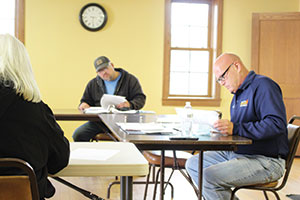 With the influx of warmer weather, the Peterson spring walkabout was conducted recently by Councilors Gail Boyum and Chris Stenzel on behalf of the council. The two independently surveyed both residential and commercial properties, with Boyum additionally taking photos.

Boyum wasn’t sure under what particular ordinance the chaff and dust would fall under but noted it’s a nuisance and that it could fall under existing prohibition on noxious things blowing.” The thing is, Burdey’s attracts a lot of people. Chuck’s, I think, has 10 full-time employees. They’re both very important businesses. There’s got to be a way for one business to not affect the other.” She further detailed pallets, debris, and agricultural equipment behind Chuck’s Feed & Grain that are visible from residences and the Andor Wenneson Inn.

Videos of the dust, also provided by Boyum, showed the corn chaff and dust billowing from grain shoots and trucks as they’re loaded. “It happens every time they fill,” added Boyum. “Pollution control would not put up with this. When people go by on our trail, this is happening. It’s accumulating. She also noted that debris piles from loading are attracting both deer and raccoons to town.

Several non-compliant residential properties were highlighted in photo and discussed, but the property addresses were not disclosed. Issues with them ranged from the parking of campers longer than 72-hours, debris in backyards, particularly along alleys, collapsing structures, tires, unfinished constructions, furniture on sidewalks, and a combine in a side yard. Items around the outside of the former Peterson school and family members living in a camper parked on a property were also discussed as definite ordinance violations.

“People coming into town, the first thing they’re going to see is this,” said Councilor Tracy Seelbinder, referencing on photo.

“I’m not sure what to do about the back. The neighbor has a completely tidy property. Is fencing what’s needed?” aked Boyum, regarding another.

“You shouldn’t have all of that out,” added Stenzel.

Boyum suggested the city retain a dumpster for a free collection. “You can only bring what’s outdoors and it’s one-time only. This is pride in Peterson. Maybe that would help,” she noted. It was clarified, however, that an open dumpster could invite items that have separate disposal fees and procedures from the county, such as tires, electronics, and hazardous waste.

The council elected having Mayor Tim Hallum and Councilor Dave Colbenson go through the notes and photos, discuss zoning ordinances, and determine what the city will detail in each letter. A letter will be sent to each property found in non-compliance with city ordinance. “The sooner the better,” said Hallum. “Thanks for doing the walk around. I see a few properties didn’t make it into the photos, so that’s a good sign. Most were good last year about working with the city.”

In other news, the council unanimously approved a contract for annual cleaning and inspection of the water tower with KLM Engineering. The cost is $2,000 per year for the next 10 years. “The cleaning is a big part, but to have someone tell us it’s structurally sound is what I’m looking at. It’s a locked in price. They can’t raise it and we can get out of it if we need to,” said Public Works Director Rick Lee.

The council is also one step closer to approving and ordering a new welcome sign for the Root River State Trail. Stenzel has been working with Art Sign Works, of Murrieta, Calif., to develop a custom sign. The first proof is back and while it got good reviews from the council, they did opt to make some changes.

The current proof is a 24-inch by 48-inch composite gold-colored sign, with three-dimensional detail, the city’s website logo, and “Welcome to Peterson” on one side and “Velkommen to Peterson” on the other in maroon lettering. The council’s only collective suggestions for changes were to swap the coloring so the sign is maroon and the lettering is gold. Typically, designs get one proof included and all other alterations are on a charge-basis. Because swapping the colors should be simple, it was requested that Stenzel see if the company is willing to forgo the added charge. It was also suggested that authentic Peterson school gear be shown to the company to ensure the colors are true.

“I think it’s pretty full. We don’t think we need to add anything. I thought it looked pretty nice,” said Stenzel.

“It looks clean,” added Hallum. “See how long it’ll take and find out about down payment.”

The idea of a city community garden is gaining slight traction. Two more individuals have come forward and expressed interest. However, City Clerk Chris Grindland wasn’t sure that four people wasn’t enough interest to have the area in consideration prepared for a garden.

“We still have time before the May meeting. No one’s going to be putting in a garden before May 15. We’ll make a decision then,” noted Hallum.

The city campground is cleaned up and open for business. Bathrooms are on, but water to campers is being held off until the nighttime temperatures stay above freezing. The campground sign will be taken down, mended, and repainted until a new one can be ordered or put up. It was suggested the city look into a second smaller sign for the campground once the trail sign is decided on and that a discount might apply.

“It’s the welcome as you drive in. We should have a nice sign there,” noted Boyum.

The next regularly scheduled council meeting is Wednesday, May 12, at 6 p.m., at city hall. The meeting is open to the public.