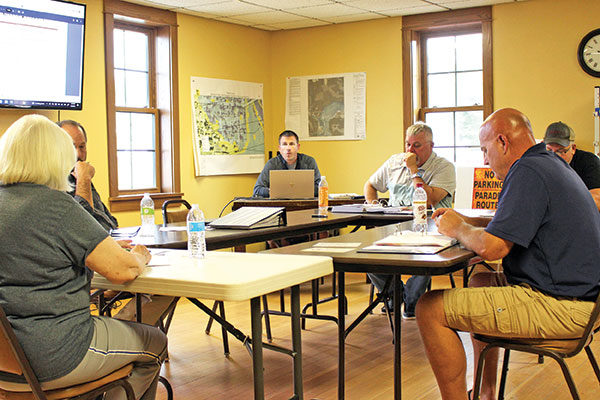 The City of Peterson is looking at cleaning up and updating areas of its city park and campground and is intending to hold a public hearing for proposed plans and other citizen suggestions. In the meantime, certain areas of the park will be getting updates that are causing poor accessibility.

Part of the process is moving a transformer pole directly to the west of the current restrooms, as the pole prohibits usage of the road loop and dumping station. At the June 8 meeting, the council discussed a quote from Norman’s Electric Service (NES). The quote includes moving of the transformer to the next pole to the south, trenching power from the pole to a new service platform by camper site no. 1, installing a new 200 amp service on the platform to the existing underground into the new service, and removal of the old transformer pole. The cost of the work is estimated at $6,682. However, only moving the removing the pole and transformer can be done for under $1,500 according to Public Works Director Rick Lee

An additional option to the quote includes adding a second empty two-inch conduit from the transformer pole to the platform for possible addition of 200 amp service in the future. This was estimated at $825. Any work beyond just moving the poles allows for options as the park expands and is updated.

“We’re not upgrading anything now,” stressed Mayor Tim Hallum. “It will be done for the future. We need to plan the new service so it’s big enough for down the road.” The city can tap both the Campground and Electric Funds to cover the costs of the work. “It’s an upgrade we need. We still need to do this sometime, sooner or later.”

Whether or not and when to proceed with the added electrical work though was discussed. “Do we do it with the campsite upgrades or is it better to do it all at once?” asked City Clerk Chris Grindland.

“We haven’t laid out that side,” responded Councilor Tracy Seelbinder. “We’re just scratching the surface.”

“Until we officially get the quote for water and sewer… if we can’t do it, we can’t do it,” added Councilor Chris Stenzel. Once that happens, the council will be able to hold the public meeting to determine the best path moving forward. It was noted that new legislation requires engineering should the city add sewer and water.

“We need that number to know if we’re going to be able to move forward,” stated Hallum. Near the end of the meeting, Lee indicated he’d just received a verbal quote for the work. The council will review options and discuss the matter at the next council meeting.

In other park related news, the city has given the greenlight to Friends of Peterson to apply for a Southern Minnesota Initiative Fund small cities grant that can be used to upgrade areas of the park. Both the city and Friends of Peterson can apply for up to $10,000 each. The only catch is that the grant application deadline is June 23 and the city hasn’t held a public meeting about campground plans. “We could each apply for it. Are we gonna give up $20,000?” asked Councilor Gail Boyum. “I think the council needs to decide if we’re still interested in doing a path through there,” she added, referencing a proposed park and city trail around the former Rushford-Peterson Middle School athletic field.

It was asked whether the city can start the application process and turn it down if awarded, if citizens do not want to move forward with the trail. “If we turn it down, don’t ever apply again…,” cautioned Boyum.

Hallum suggested the city apply for the funds and if residents decide not to move forward with the trail on the athletic field that it could be put down below the concession stand and pavilion where the softball fields used to be. “We’ve got plenty of room; I think we should write the grant and see what we can get,” he added.

“It’s for small towns to do projects like this and it’s pretty broad,” noted Boyum.

The council has completed its annual walkabout to make sure properties are in compliance with zoning regulations. Grindland, Hallum and Councilor Dave Colbenson were to meet June 9 to discuss the notes from all the councilors. The findings and summary will be discussed at the next meeting.

The next regularly scheduled council meeting is Wednesday, July 13, at 6 p.m., at city hall. The public is encouraged to attend.