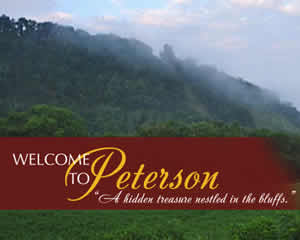 The City of Peterson is steadily making its way through looking at various options for phased projects rejuvenating its city park, which includes substantial green space from the former athletic field for Rushford-Peterson Middle School. All plans discussed in recent months have been preliminary and are leading up to a public informational meeting to gather additional ideas and public opinion. At the May 11 meeting, citizens present questioned the plans and offered suggestions.

Councilors Tracy Seelbinder and Chris Stenzel are heading up potential planning for the project, with assistance from the council, and have put in considerable time measuring the site, as well as researching options and seeking out both estimates for a starting point and potential funding for certain aspects of the draft design.

An estimate of costs to extend sewer and water to the park for new restrooms with showers, as well as service to four additional camper spots, is expected from Generation X Construction. The campground is currently limited to just nine sites due to lack of showers and the city would like to have the flexibility to offer more. The city’s current camp rate is just $30 and the council expects it could raise that to $35-45 with the expanded camp sites, showers, and other improvements.

“April was 30 degrees on average, but people are starting to come now,” noted City Clerk Chris Grindland. “We have weekends booked out now. It stays pretty busy.”

The sewer line currently runs east/west behind the line of houses on Park Street and it’s expected that extending it south to the park would be simple. However, the water line currently runs up South Church Street and comes across the Root River State Trail. It’s unclear at this point what it would take to extend water further to the east and what stipulations would be in place for extending it to a park rather than residential or commercial properties. Water service currently at the park hasn’t got sufficient pressure to serve additional sites and the new restroom/showers.

Stenzel reiterated that at this point, everything is purely preliminary and that the city isn’t looking to do everything at once, but rather in five to six phases. Several options for grants and funding are being explored.

Public comment on the park was mixed and resident Joe Kochen noted that the ball already seemed to be rolling. Former councilor Loren Rue suggested the city use the land to look for an additional tax base for the city.

“I’m not sure how much the campground would benefit the city from an income standpoint,” said Rue. “At this community meeting regarding the campground, will you have a study done for cost analysis and benefits to the city? If there were homes on that property, we’d have revenue on a consistent basis, not a six month basis. My concern is that the council is just pursuing one idea and not taking a look at other realistic competing ideas. At the time the council has the informative meeting, basically, as things stand now, you’ll only be presenting one idea. What kind of work are you willing to do to consider other ideas?

Mayor Tim Hallum clarified that the city council previously looked at the option to develop the field into housing and it was cost prohibitive. “You were on the council when we discussed this before,” recalled Hallum, noting the city couldn’t afford to develop the land with the cost of street and utility infrastructure.“We weren’t looking at homes anymore.”

Kochen and resident Desiraei Halvorson sought some clarification on the type of trail being proposed in the field area and offered some suggestions for park amenities.

“It’s more for city people to enjoy and livelihood of families… a place people can go,” explained Seelbinder.

“None of this will ever get moved forward until we have a public meeting,” reminded Hallum. The date for the public hearing has yet to be set. The date and details will be in a future city newsletter.

In other news, the new welcome sign is closer to its grand installation. The county has given the dirt dredged from the Root River near the site to the city to use for topsoil and council representatives will be meeting with the landscaper, Ruskell Outdoor Services, Chatfield. “Everything is moving forward as planned,” noted Councilor Gail Boyum. “We’re moving right along and it will be done before Gammel Dag. Sentenced to Serve will be assisting with the installation of the new composite sign.

In new business, the council has been made aware of a number of zoning violations within the city. The council will hold a special meeting Wednesday, May 18, at 6 p.m., for the purpose of conducting their annual “walkabout.” During the meeting, the council will walk the town, review all properties, and note those out of compliance. Largely, this year’s violations are parking and debris-related. Properties deemed not in compliance will be sent a letter outlining the reason for the violation and how to bring the property into compliance, as well as a copy of the city ordinances. They will have a specified time to correct the issues or be faced with citations.

The city’s pet ordinance is also a key issue presently. “I visited with the dog catcher about numerous complaints,” noted Hallum. One property owner was spoken to and the city will need to involve animal control and law enforcement. “Barking, animals at large… we have to get this under control,” he added. The city does not have a specific time frame, but rather 24-hours noted in its ordinance for barking animals. According to Grindland, the fine listed in the pet ordinance is $700.

A new GaGa Ball Pit was recently donated to and installed in the city by Gibson Darr, with assistance from other scouts, as his Eagle Scout project. “It was put in last Saturday and there were already kids using it on Sunday,” said Hallum. Instructions for the game will be placed on a sign adjacent to the pit.

The next regularly scheduled council meeting is Wednesday, June 8, at 6 p.m., at city hall. The public is encouraged to attend.