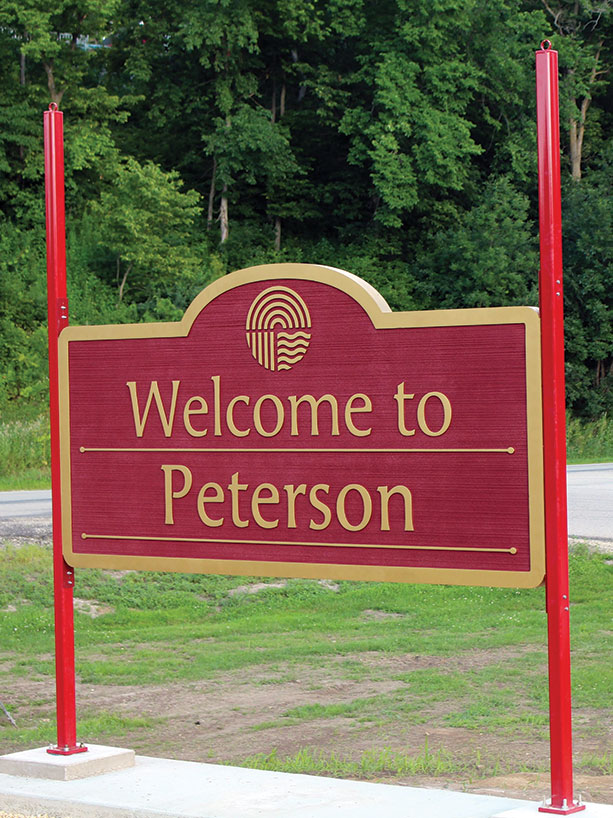 An interesting turn of events at the September 14 Peterson City Council meeting saw the hiring of a new Public Works director, resignation of the mayor, and mayor pro tem stepping into the mayoral role through the end of the year.

During new business, City Clerk Chris Grindland stated four applications for the position of Public Works director were received, reviewed, and all four candidates interviewed. “We’re quite fortunate that we had four good candidates,” said Grindland. “It was close between all and a really tough choice.” Candidates included Mayor Tim Hallum and Councilor Dave Colbenson. The recommendation was to hire Hallum.

“A couple things go with this,” cautioned Grindland. “Tim wants this job and if we offer it to him, this is his last day as mayor. He’ll have to resign his position. Dave is acting mayor and would step into the role. Tim and Dave don’t get a vote on the position and it’s the council’s choice on who they hire.”

Remaining councilors Gail Boyum, Tracy Seelbinder, and Chris Stenzel unanimously approved the recommendation to hire Hallum. He will replace retiring director Rick Lee, who is staying on through the end of 2022. The city will likely contract with Lee beyond that in order to cover its water and sewer licensing requirements. Hallum’s employment is effective October 1. Colbenson will serve as mayor through the end of the term.

Also approved was a motion regarding oversight of city employees. If issues arise, they should be taken to the mayor first. “It’s a great idea,” noted Grindland. “That way there’s communication from one person to make sure it gets done.”

The council also reviewed the 2023 budget and approved the preliminary tax levy. The expenses for the year are the same as in previous years with nothing new added. After some discussion, the preliminary levy was set at 8%, or $105,973.

“With the way inflation is right now, I think we have to,” noted Stenzel. The council may reduce the levy amount, but it can’t be raised beyond that level. The council is required to set the final levy by December.

The council also discussed ongoing proposals for the city park. A consensus was reached to not proceed with several of the items at this point, instead waiting until plans can be further reviewed by the city. Some of the ideas have included sport courts, a grain bin gazebo, and a trail system for the former Rushford-Peterson Middle School athletic field.

“I would really like to have that meeting before spring,” urged Boyum. “There’s a big grant I can apply for and we could do an awful lot with that. Things keep coming up. The longer we wait, the more we miss out on.” She noted one grant due October 1, another shortly after, and the possibility that Fillmore County may have more available November 1.

Grindland suggested the city delay and not have a massive project at the park at this time. As part of the discussion, the council approved renewing the agricultural lease at the bottom portion of the city property for another year.

One of the grants Boyum referenced was up to $300,000 in funding. She suggested it could be used to upgrade the water availability at the park, a long-standing topic. Lee noted the costs are $46,000 for water installation, $10,000 for the plans and spec, and at a minimum, $50,000 for the building housing showers to be ADA-compliant.

“Keep in mind the water tower and a new well are needed. Don’t lose sight of that stuff,” said Lee. The current city water reservoir is 120 years old and is difficult to access. “You’re talking grants… you’d have to get an engineer for the water tower. I have an idea of where I think it should go, but I’m not sure if it would ever fly with an engineer. The only alternative besides the bluff is to put up a tower, but it’s more expensive.” Likewise, the city has a well, but it’s the only one and the Department of Health has urged a secondary well be installed. “If your well goes and you don’t have water, that’s a public health concern,” cautioned Lee.

While no big plans were made at the park, the council did approve having a mural painted on the park concession stand after rave reviews from citizens over the first of two murals painted on the post office building. “The first thing you see is the pavilion. Something on that wall would be great,” noted Grindland. A preliminary drawing of the mural will be presented to the council for approval prior to work commencing this fall.

As a reminder, the citywide fall cleanup is October 8 from 9 a.m. to noon or when both dumpsters are full. “We’re happy we’re having it again. There should be plenty of room for whatever people bring up,” said Grindland.

The next regularly scheduled council meeting is Wednesday, October 12, at 6 p.m. at city hall. The public is encouraged to attend.