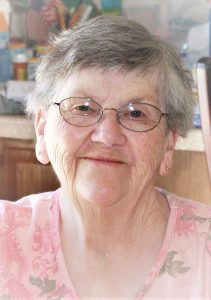 Mary E. Mindrum, 92, of Lanesboro, passed away on her birthday, Wednesday, September 21, 2022, at her home in Lanesboro.

Mary Eleanor Nelson was born September 21, 1930, in Lanesboro, to Willie “Bill” and Bertha (Gates) Nelson.  She grew up in Lanesboro and worked for Hanson’s Drug Store while she was in high school.  Mary graduated from Lanesboro High School in 1948.  In 1950 she married Caryl F. Mindrum. Mary worked for General Electric and the post office, from where she retired.

Mary enjoyed reading, watching the Minnesota Twins, playing cards and board games.  She was a member of the Lanesboro American Legion Auxiliary, the Sunshine Club, and United Methodist Church.