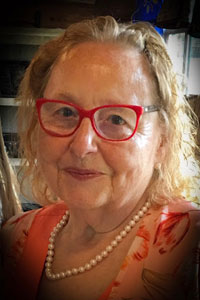 Loretta Kay “Landy” Hansen, age 77, died peacefully in her home surrounded by her children and loved ones on Tuesday, October 1, 2019, due to complications from Mantle-Cell Lymphoma.  Loretta was born on November 12, 1941, to Roy and Marguerite Landy in Minneapolis. She was one of five children. Loretta graduated high school from the Academy of Holy Angels, attended the University of Minnesota, and later graduated with an associate of science degree from Rochester Community College. Loretta met Stafford Owen Hansen at the Red Owl store in Minneapolis and the two were married September 16, 1961.  Loretta worked for Red Owl and together with Stafford built and owned the Red Owl store in Spring Valley (now the public library). In Spring Valley, Loretta also owned the Montgomery Ward Catalog Store and served on the Spring Valley Area Ambulance for many years. In 1986, Loretta began working for Mayo Clinic as a medical lab technician, where she served gratefully and tirelessly for 28 years.

Loretta served on the library board and was a member at St. Ignatius Catholic Church.  She was an avid reader and enjoyed discussing literature with fellow book club members, family, and friends.  Loretta and Stafford made life-long friendships while playing couples Bridge for over 30 years and Loretta continued with ladies Bridge club through July, 2019.  Loretta was always ready and willing to attend a theatre, opera, or musical performance or perform herself with a practical joke on her sisters or in-laws. She was the #1 Twins fan with souvenirs and memorabilia to prove it, attending games with her children, grandchildren, or heading to the ballpark by herself.  Loretta also enjoyed many years of “family camp,” traveling to state parks across Minnesota, with the finale this summer hosted at the family home. Loretta was always up for an adventure and traveled solo along the North Shore and around the state, across the country to both coasts with her sisters, and around the world to visit her grandchildren in Saudi Arabia.

Loretta was a constant source of peace and joy, showing unconditional love, forgiveness, kindness, and grace to others. She was fortunate to have the best hematology team and nurses at the Mayo Clinic. Through her final days her family gathered around her to lift her up as she began her journey to heaven. Her body is now healed and she will forever be remembered. We are grateful for the time we had with her and for the knowledge she imparted on us.  For she had discovered the secret to a happy life: love and family.