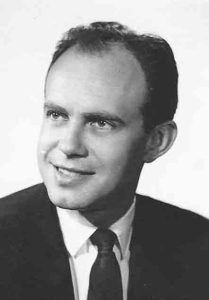 An avid sports fan, Keith Burmeister was a Harmony Cardinal in his youth and an enthusiastic Lanesboro Burro booster as an adult.

Franklin Keith Burmeister was born in Harmony, Minn., to Frank and Clara (Berg) Burmeister on July 20, 1929.  In his 92 years, Keith was in the U.S. Army, a barber, a math teacher, an insurance salesman, a guidance counselor, a city clerk, a golf course groundskeeper and a school bus driver. He had a wonderful baritone singing voice and was an exceptional golfer.  Keith won many golf tournaments and shot a hole-in-one three separate times. He remained a competitive golfer well into his 80s!  Very civic minded, he was a member of Bethlehem Lutheran Church, the American Legion, Lanesboro Golf Club, Lions Club, Sons of Norway, and various arts organizations.

Keith met his wife Beatrice (Teigen) at the Good Friday service at Bethlehem Lutheran Church in 1954.  She was directing the church choir and he had closed his barbershop for the afternoon service.  They married six months later, on December 28, 1954. The two of them continued the music tradition throughout their life together with Keith singing and Bea accompanying him on piano.

Keith died on March 20, 2022, and Beatrice died on June 25, 2017.  They are survived by their two daughters, Heidi (Phil) Dybing of Lanesboro, and  Tanya (Steve) Stadem of Sioux Falls; six grandchildren and 11 great-grandchildren.

Burial will be at Lanesboro Cemetery at 1:30 p.m., with military honors by Lanesboro American Legion Post #40.