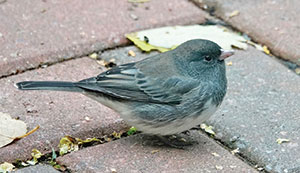 The temperature dropped as if it had spotted a State Patrol squad car.

Then something landed in my yard. It was no mere bird.

A junco is a handsome little bird, maybe five inches long and weighing as much as four quarters. Its belly is white, the color of snow. It’s back the color of gray clouds. It carries the team colors of winter in its feathers. There was a white flash to the sides of its tail when it flushed as if it had magically burst from a chrysalis into a butterfly.

I’m not sure if my yard was a destination or if the junco was vaguely meandering south. As a man whose compass constantly needs winding, I’m in awe of the abilities of traveling birds. Its arrival may portend winter, but if the junco hadn’t arrived, winter was still coming.

Many people think of snowbirds as retirees who avoid the snow and cold temperatures of northern winters by moving south for the season. The junco is a snowbird that doesn’t clog traffic. The junco and the snow bunting are both worthy of the “snowbird” moniker. The snow bunting, which I consider a “snowflake,” is a winter beauty of great endurance. Naturalist John Burroughs wrote of the bunting, “This is the only one of our winter birds that really seems a part of winter — that seems born of the whirling snow, and happiest when storms drive thickest. Its calls, coming out of the white obscurity, are the sweetest and happiest of all winter bird notes. It is like the laughter of children.” Old-timers considered the arrival of snow buntings in large numbers indicated the approach of a hard winter. Juncos are called snowbirds because they are more likely to visit feeders on snowy days and their return from their northern breeding grounds foretells cold and snowy weather. Another reason for the nickname may be the junco’s white belly and gray back, which was described by Howard E. Parkhurst as “leaden skies above, snow below.” Frank Sweet penned this, “Which came first, the birds or the snow? Or was it together they fluttered down? The spirits in white, who seem to know. And talk with the spirits in drab and brown? And which are the merriest ones at play? The flakes which dance to the tune of the breeze, or the birds which flutter and fly away, and chatter and call from the nodding trees?” On rare occasions, I’ve heard American tree sparrows, often found in the company of juncos, also called snowbirds. And I’ve heard a junco referred to as a “snow sparrow,” as it’s a native sparrow.

Anne Murray sang “Snowbird.” It was a hit, but was she singing of a junco or a snow bunting? She sang this about the snowbird, “Spread your tiny wings and fly away. And take the snow back with you. Where it came from on that day.” No snowbird has ever agreed to Anne Murray’s request.

The junco isn’t as rare as a positive campaign ad, but when a junco made an appearance on the farm, my father declared we’d have trackable snow in six weeks. It’s never summer in a snow globe. It was a harbinger of winter. Gray skies abound and snow on the ground. It defined the onset of winter, but like every meteorologist (human meteorologists are incredibly accurate), the junco wasn’t always right. The six weeks applied only to where the junco was spotted. When cold by the boatload followed the junco, I packed up and moved from my bedroom to the basement, which was closer to the furnace. I slept on a cot next to a haunted furnace. It made sounds like a humpback whale with a bellyache. It can be a rude world.

An early arrival of a junco means there is a long winter ahead. So does its late arrival. When winter leaves, so do the juncos. Perhaps they melt.

The poet Rilke believed that human beings are put on earth to experience the beauty of ordinary things. A junco is ordinary enough to be extraordinary.