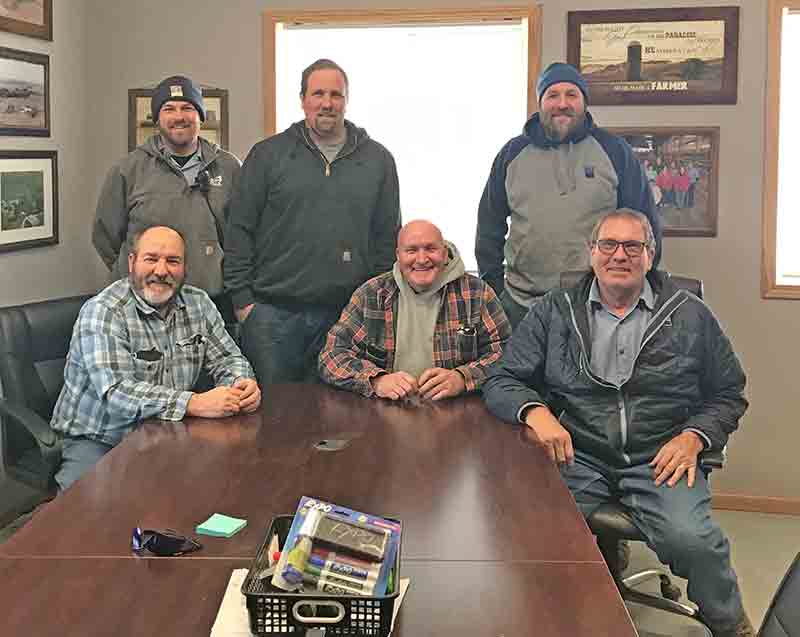 Minnesota Milk chose Johnson’s Rolling Acres of Peterson, Minn., as Producer of the Year at their annual meeting in December. In order to be chosen, someone in the industry nominates a farm; the farm then fills out an application. Rolling Acres has been nominated for the last five years; this year they were chosen. Peers in the community of milk producers choose the award winner, looking for good representatives of the industry.

Mark Johnson noted, “None of us feels that we are any better than others.” He felt that one reason they were chosen was how they were handling the transition of the farm to the next generation of Rolling Acres.

The Johnsons pointed out that this award celebrates the lifetime of the farm, the legacy of what LeRoy and the current older generation did.

LeRoy Johnson, his wife Darleen, and their family moved to the area in 1967 and started farming with 220 acres. The farm has always been diversified; at the beginning, they had 36 cows, and a half a dozen hogs. Through the years, Rolling Acres has consciously made a decision to add more land and grow.

Today Rolling Acres has 1,200 cows and raises 11,000 hogs a year with acreage of 3,000 acres. LeRoy’s sons Mark, Brad, and Richard, along with the next generation of Johnson farmers, Trinity, Zac, and Lee are the partners now. A total of 27 full-time workers including the Johnsons work at the farm; 15 of those workers are in the dairy full-time.

Trinity Johnson commented, “People see the numbers — they don’t see that there are eight families and the employees living off that. While this is a big farm, it is still a family business.”

The Johnsons divide the farm duties; Mark and Trinity focus on the dairy, Brad works with the pigs and maintenance, Zac and Lee have taken on a lot of the maintenance and agronomy, while Richard is the farm manager, overseeing the entire operation. With this division of work, the men are not constantly criticizing each other. Kelsey Anderson is now the bookkeeper, having taken over when Ellen Eide recently retired.

At this point, the three older partners, Mark, Brad, and Richard have a weekly meeting to discuss details of the operation; they plan to soon add the next generation, Trinity, Zac, and Lee to those meetings. While they sometimes have disagreements, at the end of the day, they reach a consensus since they have the same end goal in mind.

In order to join the farm partnership, the younger generation was required to attend at least two years of college, take a job off of the farm for two years, and serve a two-year internship on the farm. At the end of the internship, the decision was made by the current partners and the applicant whether they were a good fit for the farm. Lee commented that he had enjoyed working elsewhere; he felt there was a lot of value in it. The Johnsons intent is to have the new partners experience being an employee, thus helping them to understand working with employees.

The team of owners are hopeful that some of the next generation will one day join them in the farm; some are already interested. They stress that they don’t try to force the young people to join the team, and they want them to enjoy being kids.

The management team works 12 days on with every other weekend off. They make a point to make sure to help each other out so they can go to their kids’ sports events and have family time.

Mark, Trinity, and employee Walter Laumb breed the cows. The Johnsons take care of a lot of the routine vet services, but also use Dr. John Rein of Harmony Cresco Veterinary Clinic as needed.

Calves from the farm are raised by Brett Broadwater of Preston, from the age of three days and are returned to the farm at six months.

When asked about plans for expansion, Mark said, “As of right now, I do foresee that we will expand; it depends on the opportunities.”

Richard added, “It’s a necessity for continued success in the business.”

According to Mark, one thing that surprised him over the years was the use of technology. He mentioned being able to access records on the machinery when they are out in the field. As we were talking, Mark got a call on his cell; the mooing ringtone was to alert him that a heifer was in heat. He shared that he didn’t need to hurry to inseminate the heifer since she was to be carrying an implanted embryo from the farm’s partner De-Su Holsteins in Iowa. De-Su would be transferring an embryo in a week to Rolling Acres’ heifer. Rolling Acres returns some of the top genetic heifers to De-Su later.

The cows are kept an average of 4.6 years, but they are kept as long as possible. Rolling Acres spends a lot of money in housing to keep their cows healthy and happy. From the records, they can tell if a cow is still producing well.

Johnson’s Rolling Acres’ philosophy is to treat their employees as family; the employees are part of the team. Success depends on everybody. They want everyone to enjoy what they are doing.

Richard summed up the family’s feelings about the award, “It’s an honor — other people that we respect gave us this award. This goes beyond producing a gallon of milk.”