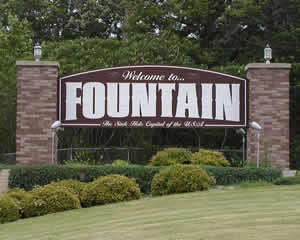 In a brisk meeting, on October 6, the Fountain Council reviewed a cooperative purchasing contract with Sourcewell. The company, located in Staples, Minn., assists municipalities and other non-profit organizations with obtaining insurance, equipment, and technology at competitive rates. Boasting more than 50,000 members, Sourcewell functions as a cooperative for contract purchasing. Up until three years ago, they operated for 40 years as National Joint Powers Alliance.

Suggestion of the partnership was brought to the council’s attention by Fountain Assistant Fire Chief Chad Wangen. The department, having looked into utilizing Sourcewell for the purchase of a new fire truck next year, says it can save $10,000-15,000 with the membership. “It keeps them honest on bids; within state bid specs,” said Wangen.

According to the company’s website, their procurement team leads the, “entire competitive solicitation process – both request for proposals on general purchases and invitations to bid on construction contracting,” a sometimes cumbersome undertaking for cities. Users must register for the free membership, but there is no commitment or obligation to purchase. Using the online platform, members then browse available contracts by product type and contact the supplier providing their Sourcewell member number.

“We can purchase health insurance through it, fire equipment… just about anything you need as a city and it’s discounted,” added Mayor Jim Schott. He indicated he’d heard both Preston and Lanesboro were members, but after checking, learned they were not. However, he stated he had heard from Preston Clerk Joe Hoffman who he said indicated the company was legit.

“If it can help the city – they don’t have money and we don’t have money. If you can save money, it’s a no brainer,” noted Councilor Ron Reisner. The council unanimously approved moving forward with the membership. Wangen indicated Fire Chief Jason Wright could assist City Clerk Mary Tjepkes with registering the city.

In other news, a citizen complaint was presented by Schott, who indicated sand and gravel are being washed into yards by the three speed bumps that were put in place on Cedar Street earlier this year. A request last month by resident Richard Kujath to move the three speed bumps was denied by the council, which at the time noted the bumps could not move. While the  speed bumps can be taken down for the winter season, they are mounted on inserts bolted to the roadway. Unless the city purchases more inserts to bolt down, they cannot be moved directionally.

“It’s made a world of difference on that street,” added Reisner. The speed bumps will be taken down for the season soon, but the council will leave the inserts and took no action to order additional inserts.

The council did approve plans for the public Pubkin Crawl, a pub crawl event, to be held October 23, from 2-6 p.m. One of the organizers, Brian Ostby, presented plans to the council. The fundraiser features stops at six, “possibly seven,” businesses in the city. The cost to participate is $20 in advance or $25 day of, per adult.

“People do dress up!” responded Ostby. The event was approved unanimously.

Also approved at the meeting was a request for two additional chair racks at the community center, a cost of $543.50. The goal is to add further convenience for storage and when cleaning the facility.

The next regularly scheduled meeting is Wednesday, November 3, at 7 p.m., at city hall. It is open to the public.