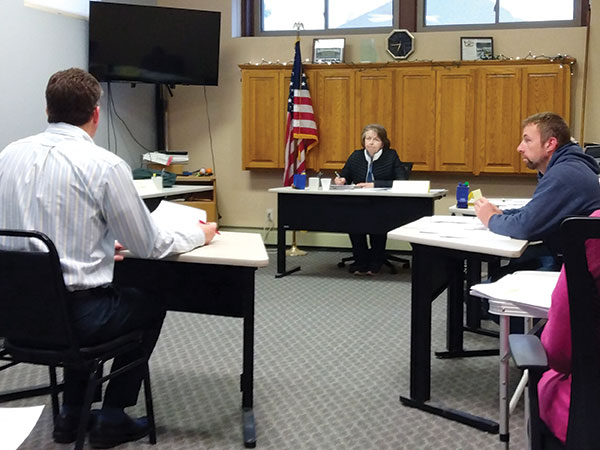 When one of the two Rushford Municipal Airport hangar buildings was destroyed by fire in October 2019, the question for the city wasn’t whether or not to replace it, but how. The six-unit hangar was half the airport’s hangar capacity and not only drew revenue for the airport, but kept the airport at a Federal Aviation Administration NPIAS (National Plan of Integrated Airport Systems) size classification which allowed the city to access federal funding.

With construction prices on the rise due to the pandemic, an early base estimate in July 2021 rang in at $623,725. Alternate 1, addition of a fifth hangar unit to the design, was $779,225 while Alternate 2, addition of both Alternate 1 and a sixth hangar unit to the design, was $934,725. By March 2022, those involved in the project saw the full effect inflation had on costs. Skyrocketing price increases were seen in the five bidders’ proposals with the low bid on a four-unit ringing it at $864,944 and the high bid at just shy of $1.2 million. The low bids for the two alternates came in at 5-9% higher than engineer’s estimates. At the time, the council indicated a need to proceed with a five-unit hangar to ensure the city met FAA classification guidelines.

After the amount the city was planning to contribute through the state agreement, plus the funds from the League of Minnesota Cities Insurance Trust, the city was notified of a gap in financing of $60,000-90,000. Airport Engineer Matt Wagner, of Mead & Hunt, went looking for additional grant funding through both the state and federal programs. What he found was a combination of funds utilizing the Airport Improvement Project, an Airport Rescue Grant through the Bipartisan Infrastructure Law, and Non-Primary Entitlement Block Grants. This funding whittled the city share, after application of the funds received from the League of Minnesota Cities Insurance Trust for the fire, to just $25,000.

Utilizing additional federal dollars also meant the project had additional federal stipulations. Wanger reached out to the low bidder, Olympic Builders, of Holmen, Wis., and was able to craft at post bid addendum for the cost of $5,564. Mead & Hunt’s contract was also amended to the tune of $28,750 for the incorporation of federal requirements, determining US Department of Transportation’s Disadvantaged Business Enterprise goals, the compilation and processing of environmental documentation, federal record drawings and project closeout.

The state has not fully allocated AIG funding for the $1.1 project yet, so there is the potential of the city needing to contribute an additional $6,000. At the April 25 city council meeting, it was suggested the council award the bid for the five-unit hangar to Olympic Builders contingent upon state funding. The bid was awarded unanimously.

Timeline for the project includes submittal reviews from the contractor this summer, with site prep beginning this fall. Building construction is slated for spring 2023.

In other news, Rushford Library Director Beth Nelson presented the annual library report. In person programs have increased in the wake of the pandemic and there were 22,430 visitors to the library in 2021. Self-directed programs have also increased, including STEAM kits (Science Technology Engineering Arts Math). Online visits have dropped off sharply so they will be discontinued, as will contactless pickup. E-materials, through cooperation with SELCO (Southeastern Libraries Cooperating) continue to increase rapidly having gone from 21,000 in 2020 to 67,602 in 2021.

Nelson is also increasing programs and events for the library. Since getting kids into the library for Story Time can be an issue, Nelson kicked off Emerson on the Go last year, taking the library’s popular tortoise, Emmerson, to kids classes. “If people can’t get to me, I’m going to them,” enthused Nelson. She’s getting every last dime out of donations, SELCO and Legacy funding with 5-6 programs and three author visits coming.

SELCO utilized COVID funding and hired a library strategist who will work with participating libraries and city staff to gather ideas to make improvements for the community. The strategist will meet one on one with Nelson, virtually with select community members, then meet with Mayor Terri Benson and City Administrator Tony Chladek. Nelson will present the strategist’s findings to the Library Board.

The council also heard details of a recommendation by Rushford Police Chief Adam Eide and Sargeant Nate Klinski for the hiring of fully-licensed officer Joshua DeBoer as a part-time officer with the department. The department currently has only one other part-time officer. The importance of having as many part-time officers available as possible has been discussed for some time. DeBoer is currently also working with Preston, Lewiston, and La Crescent Police Departments. The hire was approved unanimously.

The next regularly scheduled council meeting is Monday, May 9, at 6:30 p.m., at city hall. The public is encouraged to attend.