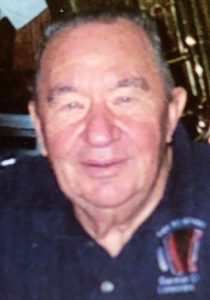 Arv served in the National Guard. He married his wife and partner in life, Janice Gunderson, on October 19, 1957. Together they had four children, Wendy (Steve) Plantz, Lisa Fabian, John Fabian, and Kathryn Fabian.

Arv began his career selling auto parts and even began his own auto parts store, Arv’s Auto Supply, in Lanesboro, Minn., in 1977. Later, when the auto parts business began to dwindle, he began selling his own homemade German sausage and sauerkraut to make ends meet. This eventually took on a life of its own and Arv opened the restaurant, Das Wurst Haus, in 1984. There Arv and Jan served not only his homemade sausages and sauerkraut, but also homemade root beer and best-selling Gentle Giant mustard. Beside his affinity for homemade German fare, Arv was also an accomplished musician. Arv played guitar, banjo, tuba, zither, and some piano – all played by ear. When Arv lost the tip of one of his fingers and could no longer play stringed instruments, he taught himself the concertina. Arv and Jan spent many years traveling around Southern Minnesota playing various gigs in their own band and at nursing homes. Their specialty was polka music. Arv and Jan’s music was also a central feature of their restaurant and was one of the many reasons Das Wurst Haus drew visitors from all over the world. Arv was known for his incredible hospitality, his sense of humor, and his talent as a storyteller. With his vitality and vigor for life, Arv touched many people’s hearts and lives. Arv was a one-of-a-kind person and leaves behind a legacy that will last for many years to come. Arv loved the Lord and often commented, “I’ve had a great life.” While he now rests with his Heavenly Father, he will be sorely missed by many here on Earth.

Arv is survived by his wife and kids, as well as one granddaughter, Emily Plantz,; along with brothers Gary and Scott, one sister, Shelly (Dave) Berhow, ;nd numerous nieces and nephews.

He was preceded in death by his parents and sister Sharon Budnick.

A memorial service will be planned at a later date. Memorials may be made to St. Matthew’s Lutheran School, Winona, Minn.