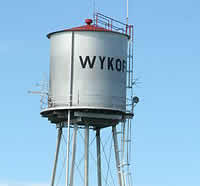 Mayor Breckenridge led a discussion on the options available for more office space. Barb Fate voiced her suggestion to add onto the current office, and/or to use the community center more frequently for city meetings.

Kaleb Himli asked Wade Baker for his opinion, regarding if the office expansion would create any problems for the fire department. Baker pointed out that, “There’s only 15 people in here right now, and we have 22 on the (fire) department.” He added that many of the fire department’s trainings include watching videos or online content, so it’s not convenient to bring the crew and video equipment elsewhere for meetings. Becky Schmidt agreed, saying she’d recently been present during a fire department training, and said, “It was standing room only, they were packed in here.”  Baker also said that holding trainings/meetings at the community center would be a challenge, since that space is often rented out, which means the fire department (or any other city departments) would need to scramble to find another site.

Schmidt added, “This is the fire hall… This is their space.” She said she’d prefer to continue struggling with a small space for herself and Luan Hare rather than infringe on the fire department’s square footage any further. Council members asked about options for extending the fire hall building to add the needed space, but Schmidt said the cost was excessive.

Mayor Breckenridge asked if the city could try a one-year lease at the downtown location, but that was not an option the owner offered, due to the costs in making the space useable. The possibility of a three-year lease downtown was then discussed, and the owner said he would offer that. The council voted 3-1 in favor of this option, with Fate voting against.

A discussion was held regarding concerns for traffic speeds in Wykoff. The council considered options for a lighted speed sign, to inform drivers of their speed as they drive past the sign. Another option mentioned was to simply paint (in large lettering) wording such as “speed limit 30mph” directly onto streets in areas of concern. Schmidt was asked to look into pricing for various options, and to bring the details to an upcoming council meeting.

The council discussed contracting with a company to perform shredding of city documents that are no longer needed. Schmidt pointed out that the majority of the city’s old records could be simply discarded, so the amount that needs to be shredded, and the associated cost, would be reasonable. The council voted to approve the shredding contract.

Wykoff received a letter from PeopleService, dated May 23, 2022, regarding PeopleService’s Operation and Management Agreement for Wykoff’s water treatment plant. The letter explains that, effective August 31, the current agreement will end. The letter also states, “We would like to continue our partnership with the city and have previously presented the city with three different options to do so. The council discussed options, but no formal action was taken.

The council discussed a letter received from Paula Jobes, encouraging the city to consider using the old bank building for a city library. Schmidt pointed out that operating a city library runs into very large costs. No action was taken on the issue.

Mayor Breckenridge reminded citizens that Wykoff does not allow dogs to be on the loose, even when being walked by the owner. He said dogs should be on a leash when walked, to prevent any unexpected problems.

Wykoff’s next city council meeting will be Monday, July 11 at 7 p.m. at city hall.