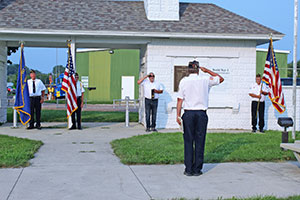 “Let us forever remember those who sacrificed for our freedom and honor them always.”  That was the premise behind a Plaque Dedication Ceremony held at the memorial entrance of the Fillmore County Fairgrounds on Tuesday, July 20, 2021.

In 2019, a program was held at the main gate at the Fillmore County fairgrounds, commemorating 100 years since WWI soldiers were welcomed home.  Approximately 500 people attended that meaningful event, which included a flyover of three vintage airplanes, speakers, displays and more.

Following that event, Colonel Joe O’Connor (USN) Ret. noted that there should be some memory honoring the 47 Fillmore County residents who lost their lives in WWI.

The idea of honoring those heroes took flight and was spearheaded by James Westby.  Westby is just finishing up a three-year term as the vice-commander for District 1 serving Olmsted, Mower, Winona, Fillmore and Houston counties.

Westby described the main gate presentation that was held at the fairgrounds when the soldiers returned as an historical event with over 5,000 people in attendance.  He commented that there are photos in the Fillmore County History Center of that day showing all of the horses, buggies and people gathered at the fairgrounds.

Westby set out to raise funds for this important project.  “We asked each VFW post and American Legion posts throughout the county, plus there were private donations, and there was a Lions Club that donated to it, so it was big area of Fillmore County that stepped up to the plate,” he states.

The plaque was ordered through Holstrom’s Gift and Jewelry in Cresco, Iowa, at a cost of $2,600.

Larry Christenson, American Legion Fillmore County Commander, welcomed those attending the plaque dedication.  He thanked everyone for coming to the dedication and for the time and money that many have spent to make it possible to have the plaque.

“The Color Guard is doing a fantastic job, you can depend on them” anytime they are needed, commented Christenson.

“And, of course, the Fair Board, this is their building so they painted, they re-shingled, the re-did new flag poles and stuff to make it appropriate for today’s event – so we thank them,” stated Christenson.

Christenson acknowledged Westby for taking the lead on the project and for installing the plaque and thanked him for his commitment to the project.  He also thanked all the VFW posts, legion posts and the Ostrander Lions Club for their donations.

Christenson then read a very touching paragraph from the Officer’s Manual, a memorial prayer:

“Comrades, this day is sacred with the almost visible presence of those who have gone before us.  We honor the memory of those who gave their lives in the service of our country, and of those others who have dropped their burdens by the wayside of life, and are gone to their eternal rest.  May the ceremonies of today deepen your reverence for our departed friends and comrades.  Let us renew our pledge of loyalty to our Country and its Flag.  Let us resolve by word and deed to emphasize the privilege and duty of patriotism.”

After a moment of reflection, Christenson spoke once again.  “When you walk through these gates here and take a look at this plaque that will be a reminder to all of us that you are walking through the gates of freedom and those veterans on that plaque are the ones that gave us that freedom, so let us never, ever forget them,” he said.

In a very solemn and thought provoking part of the dedication, Christenson then slowly read each of the 47 names on the plaque, one at a time.

A 21 gun salute and the playing of “Taps” concluded this meaningful, historical dedication, giving each person on the plaque their rightful recognition for their ultimate sacrifice on our behalf.