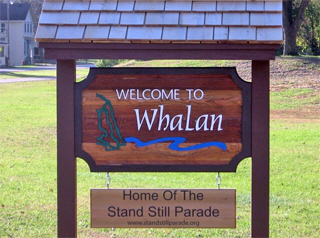 According to Whalan City Clerk/Treasurer Michele Peterson, the City of Whalan has received full reimbursement from former City Clerk Lolly Melander after receiving a check in the amount of $9,388.00.

Additions to the agenda under Miscellaneous were Declaration of Easement and June City Council Meeting. The agenda was approved with additions.

The Minutes and Treasurer’s Report were approved as read.

Along with the full reimbursement from the former city clerk, the City of Whalan has also received a $5,000 payment from insurance. The council will discuss what these funds should be used for.

Dale Peterson spoke to the council, reiterating the point he made at the April council meeting in regards to the city’s short-term rental moratorium.

Peterson is in favor of short-term rentals, saying the bike trail “is a big deal to a lot of people” and brings tourists to town, who support businesses. “I’d really like to have some of my biker friends be able to come and stay,” explained Peterson. “I’ve still got a lot of arguments in that regard.”

The council explained that the short-term moratorium is up next month and the Zoning Committee is working very hard to figure out the ordinance. “It’s been going on for so long,” stated Berekvam.

“With the public hearing, the community hopefully will come forward and tell us what their feelings are on it as well. I’m here to listen to what the community says. I see both sides of it,” explained Berekvam.

The council found many items needing attention during their annual city walking tour. Some of these include items at the ball field, such as inspecting and possible upgrade of playground equipment, possible removal of old bathrooms and replacing with portable units, picnic table repair and replacement, concession stand repair and board replacement on bleachers.

Other items include runoff on the hill, town hall siding replacement, cleaning out the old town hall building and painting the exterior of that building, and deciding on the future use of the bathroom outside town hall.

The council will need to prioritize these items and complete them as the budget allows.

The council discussed whether there is a need for additional portable bathrooms in town. The matter was tabled until next month.

Two utility poles will be replaced, the amount not to exceed $6,000.

The final contract for sanitation and recycling was reviewed and signed. Pick up is now on Tuesdays.

A Declaration of Easement has been received from the Ruberg/Murphy family regarding a garage partially on the city right of way. The council will review the request and have City Attorney Joe O’Koren review the documents as well.

The council approved scheduling the June Whalan City Council meeting on June 14 at 5 p.m. at the city hall. For more information visit the City of Whalan website at www.cityofwhalan.weebly.com or call the Whalan city office at (507) 467-2212.