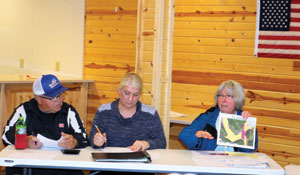 After several  years with no increase in electric rates, the Whalan City Council is making some adjustments in 2019.

Minutes and Treasurer’s Report from the April 8 council meeting and Bills Due were read aloud and approved.

Wes Harding attended the council meeting to report on the Root River Trail Towns 60-mile garage sale, which will be taking place June 21-22.  Harding noted that the 60-mile garage sale has become a very popular event and encouraged Whalan residents to participate.

The City of Whalan has a copy of the FEMA flood zone map.  The flood zone has been expanded.  Zones A and E are required to have flood insurance.  Fillmore County will have FEMA maps available, according to Tuftin.

Steve and Diane Snyder of Lanesboro attended the council meeting to ask for approval to operate a short term rental unit at a property they are considering purchasing at 511 New Street.  The council discussed various lodging in town including short term rentals, long-term rentals, bed and breakfasts, airbnbs, etc., and others and if there should be a limit on the number allowed to operate in town.

There are several factors that need to be considered when deciding on the number of lodging facilities in Whalan.   The matter was tabled until the June council meeting.

An open meeting to discuss lodging will be held on June 10 at 6:30 p.m. (30 minutes prior to the regularly scheduled June council meeting) and Whalan residents are encouraged to attend to voice any thoughts or concerns on the subject.

As there has been no increase in electric utility rates in Whalan since July 2011 and with a deficit in the city’s utility income in the first quarter of 2019, Mayor Tuftin proposed increasing rates as follows: the base rate would be raised from $23.00 per month to $30.00 per month, the usage rate of 11 cents per kWh would go up to 12.1 cents per kWh, and the block wells base rate of $10.00 per month would be adjusted to $13.00.

Cedar Valley Resort, which currently pays a base rate of $43.00 per month due to the size of their transformer, would have an increase of $7.00, for a total of $50.00 per month for a base rate.

The council approved adjusting the electric utility rates as proposed.  The new rates will take effect in July 2019.

Andy Luchen will be in Whalan in the month of May to do surveying.

A liquor license for the Stand Still Parade was approved.

Tuftin thanked city maintenance worker Lanny Landsverk, who recently retired, for his many years of service to the City of Whalan.  Randy Berekvam has been hired for city maintenance.

A request by Donna Novotny to have a book sale in the town hall during the Stand Still Parade was approved.

A building permit was approved for Rory Berekvam to build a deck.

The worker’s compensation coverage through the League of Minnesota Cities was renewed.

The walking tour of the city has been completed and the city council has a list of items to address.

Johnson reported that the ball park will be used for a tournament in July.

The next regularly scheduled Whalan City Council meeting will be held on June 10 at 7 p.m. in the town hall.  The public is encouraged to attend.