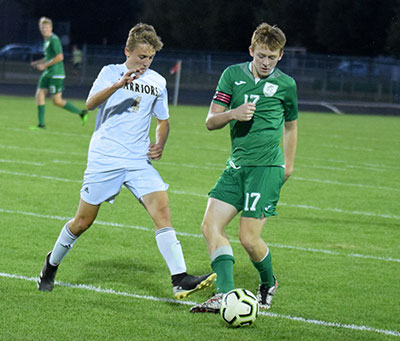 The Caledonia/Spring Grove/Houston soccer boys were within three minutes of a Section 1A Tournament upset when La Crescent-Hokah finally scored to tie the count, 1-1, and usher in a pair of overtime periods. The Lancers would score in the second extra period to claim a 2-1 win. The Warriors had received the No. 6 seed in the 10-team playoff bracket. No. 3 seed La Crescent-Hokah had previously defeated the Warriors, 4-2 and 3-1, during Three Rivers Conference play.

In this final rematch, Cal/SG/Hou took a 1-0 lead midway through the first half with a goal by Austin Meyer. Sophomore Wyatt Farrell tied it in the 77th minute of 80 minutes of regulation. The Lancers then won with senior Liam Farrell scoring his first goal of the season during the second overtime. Warrior goalkeeper August Allen made 15 saves, while Cooper Johnson saved three shots for La Crescent-Hokah. Cal/SG/Hou closed with a 5-9-2 record with seven seniors playing their final high school match – Meyer, Gabe Morey, Thomas Bechtel, Eric Myhre, Jonah Udstuen, Owen Zahn and Andrew Klinski. 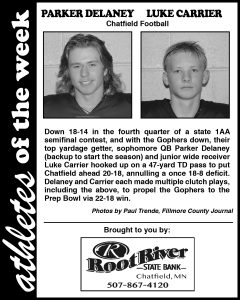