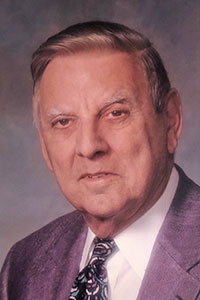 Walt was born on July 31, 1924 in Minaki, Ontario, Canada.  He graduated from the Warroad High School in Warroad, Minn., and then entered the United States Army in 1943 during WWII and was Honorably Discharged in 1946.  He was married to Donna Fristad on July 11, 1948, in Kelliher, Minn.   Walt owned and operated the Kelliher Independent weekly newspaper, sold the business in 1951 and bought the Spring Valley Tribune and later started Valley Litho in Spring Valley, Minn., and then moved to Rice Lake, Wis., in 1980.

They enjoyed spending time at their cabin in Chetek, Wis., traveling to Nevada and being with his kitty.

He was preceded in death by his wife Donna Babineau, a son, Walter Scott Babineau; his parents Wasyl and Sofia Babineau, three brothers: Nicholas, Don and Bob Babineau.