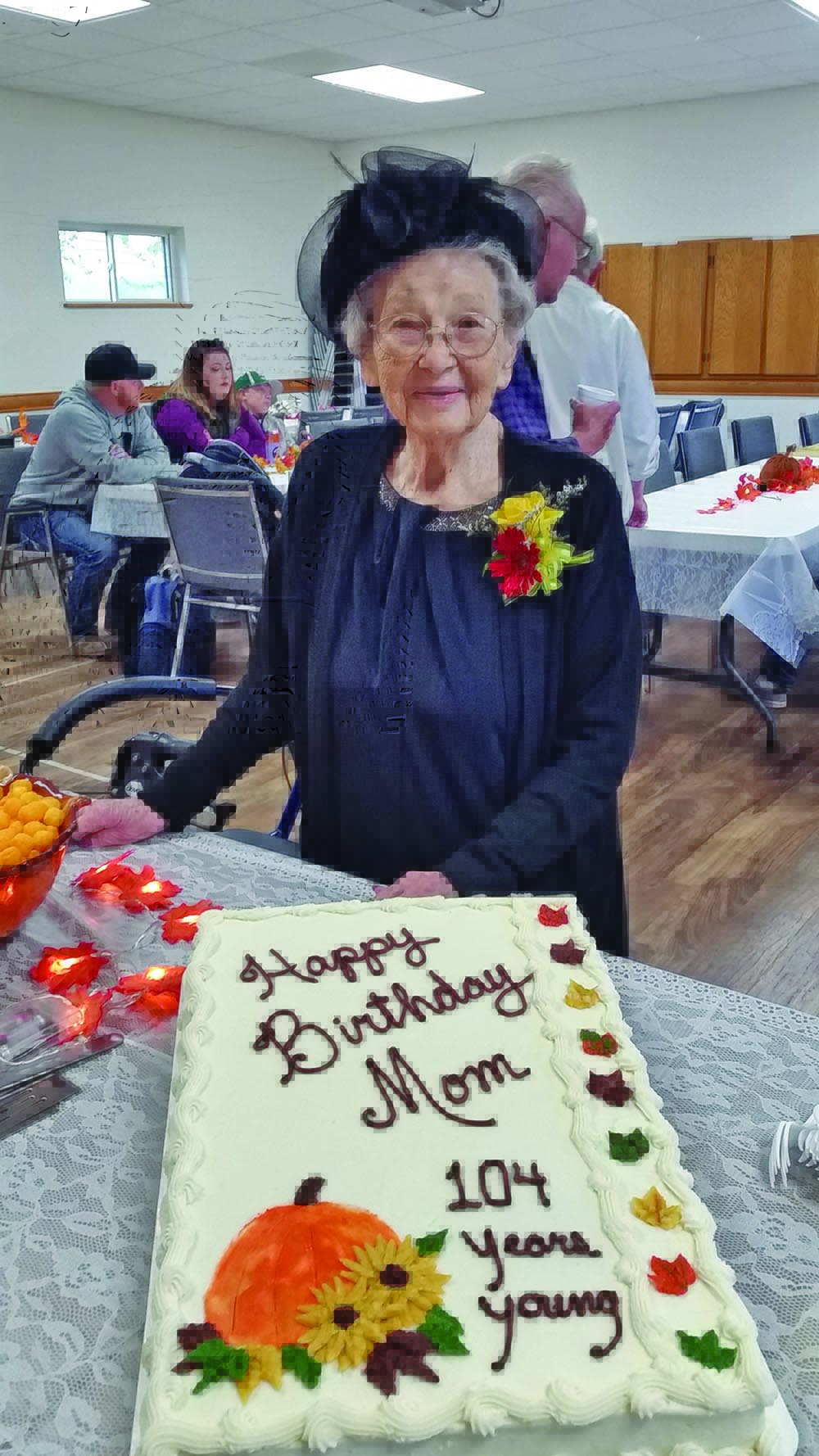 On October 1, Virginia Arnold turned 104 years old; as a baby, Virginia was either born or left at the Henke (Grandview) Hospital in La Crosse, Wis. Virginia never knew her mother. By the time she was nine months old, she’d been taken to the Lutheran Hospital; she was adopted from there by Archie and Tillie Dent who lived about 10 miles west of Rushford on a farm.

Virginia remembers them as good parents who provided her a good home. She loved following her dad Archie around the farm. Her favorite thing to do was to walk behind him as he plowed with his single plow. For fun, she’d pick up the exposed worms from the freshly overturned soil.

Virginia loved her mother’s chickens – so much so that her parents got her her very own Banty hen and rooster from Mr. Blair, who lived near St. Charles. Virginia chuckled as she shared just how smart that hen was. The Banty hen would actually peck at the door of the house when it was time to lay her egg. They would let her in the door and she’d hop up into a box behind the door, lay her egg, and then go peck at the door to be let outside again.

Virginia never had any siblings, but she had neighbors with whom she often played. They would ride calves and play in the neighbor’s barn.

She remembers riding horses as well and selling Christmas Seals as a schoolchild to benefit the American Lung Association and tuberculosis research.

Virginia remembers visiting her Grandma Peterson who lived in the woods and had a wooden sidewalk. Virginia and Melva Thompson, a friend who lived near her grandma, loved to help her grandmother clean her house.  Virginia had two old maid aunts who had a bunch of old hats; the girls dearly loved playing dress-up with those hats.

The Depression didn’t really make an impression on 12- year-old Virginia. Their family had always been poor, but they always had enough to eat with their garden, the food her mother canned, and meat and eggs from her mother’s chickens.

Virginia had little to say about the wars she’d lived through. The bad things that happened were never talked about in her home; something she thinks we should do more in today’s world – especially in front of children.

As a young woman, Virginia married Francis Mann, a neighbor. She had three sons with Francis – Stanley, Kenneth, and John. She had the first two sons at home with a midwife delivering them. Viriginia and Francis were later divorced, and Virginia was left to raise her three boys on her own. She worked in a grocery store and as a waitress at the Corner Cafe.

Virginia later married Freddie Arnold with whom she had two daughters, Gail and Mary. The couple eventually moved to Rushford where Virginia enjoyed spending time with her many friends at coffee as they visited back and forth between their homes.

In 2013 Virginia and Freddie moved to Bremer Suites, an assisted living home associated with Good Shepherd Home in Rushford; Virginia still lives there. When asked how she likes being there, Virginia’s entire face lit up; she exclaimed, “I LOVE it here! They are SO good to you! I have good food, I can sleep as long as I want, and I can visit with all the other people here. No one is snooty at all; everybody is friendly!”

Virginia has no advice about getting to be 104, “It just happens; there’s no magic!” She was quick to add, “I don’t feel old!” She explained that she has never had any illnesses as a child or adult. She never contracted the usual childhood disease as a child and didn’t catch them when her children had them either. Virigina’s family has grown; she was proud to point out a wall hanging that detailed her family blessings of five kids, 16 grandchildren, 31 great-grandchildren, and 17 great-great-grandchildren.

When asked how she felt about today’s world she quickly answered, “The world is crazy! People don’t listen to each other! We can’t always agree, and we shouldn’t either, but we need to listen to each other!” Virginia encouraged people to “have a good life, and be good to people!

Virginia shared that she likes to have fun. With a lilt in her voice, she described her recent birthday party, “They had a party for me at the town hall (City of Rushford Village Hall) – we had cake that Mary made and ice cream, and my grandson, Craig Mann, brought his motorcycle and gave me a ride!” She was quick to mention that Craig also plays the bagpipes, which she enjoys!

With her positive attitude, her empathy for others, her love of fun, and her blessing of health, Virginia will definitely continue to enjoy her life. Happy 104th Birthday, Virginia, and many more!