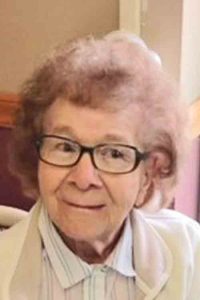 Verta Faye Louks was was born one of 20 children to Virgil and Florence (Simpson) Louks on April 17, 1931, in Martin County, Minn.

Verta grew up in Kasson, Minn., where she worked at the Kasson Bakery. On July 31, 1953, she was united in marriage with Roger Johnson. In 1959, the couple moved to Rushford. Verta cleaned the St. Joseph’s Catholic Rectory in Rushford as well as some people’s homes. She also worked at the Rushford Bakery, Rushford Municipal Liquor Store, and her son Butch’s Drive Inn in Rushford. Verta enjoyed collecting angels and cardinals, playing Bingo, listening to music and shopping. She was a woman with a lot of spunk. Verta had a very strong will and was known to be a prankster. She was a member of Rushford Lutheran Church.

Please leave a memory of Verta and sign her online guestbook at www.hofffuneral.com