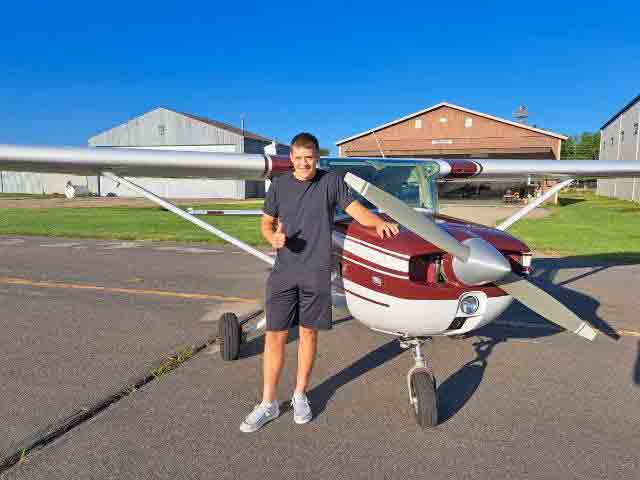 Most teenagers are eager to be on the move, traveling fast, with the sound of an engine filling their ears.  That’s true of Mason Kolling, too.  But his mode of transportation is different than that of most people his age.   Mason likes to take to the open skies in his own airplane.

In many ways, Mason is a typical high school student.  At 17, he’s about to begin his senior year of school, where he plays basketball and football.  He’s a lifelong resident of Spring Valley, where he lives with his parents (Matt and Cheyanne) and two younger sisters (Caisa and Callie).

But Mason was drawn to flying.  He stated, “I’ve always had an interest in aviation.  So I started flying when I was about 15, and I’ve been taking lessons ever since.”  Mason recalled his very first flight, which is called a “discovery flight.”  He explained that the student sits in the front seat, while the instructor sits in the rear seat and handles the controls.  At times, the instructor will have the student help control the plane during that initial outing, but mostly, it’s a chance to see and feel what it’s like to be in the cockpit of a small plane in flight.

Following his discovery flight, Mason knew he was hooked.  Understandably, he says that his family had some concerns and reservations about his new hobby.  He recalled, “My mom was pretty unsure of it in the beginning, along with the rest of my family, but they’ve definitely come around on it.”

Mason said there’s a stigma about small airplanes being unsafe, but he said that’s just not true.  He explained that the majority of mishaps are caused by pilot error, and there are enough safeguards and practices in place that flying is actually very safe, if done correctly.   Mason said the most challenging part of a flight is the landing.  He recalled one windy day when crosswind gusts at the Preston Airport were as high as 29 knots, or 33 miles per hour.  But he said he landed safely that day, and gained valuable experience for future flights.

Mason’s plane, a 1971 Cessna 150L two-seater, is stored at the Austin Airport, and that’s where most of his flying happens.  Mason shared that, per FAA requirements, his plane must be inspected at least annually by a certified mechanic.  As part of the learning process, Mason has done a number of solo flights, while other flights are done with the instructor on board.  He expects to get his private pilot license in September.

Mason recalled his first solo flight.  He said, “I did probably seven takeoffs and landings with my instructor, and then he told me to taxi back to his hangar, and he jumped out and said, ‘Now go do two by yourself.’”

When asked what his friends and classmates think of Mason’s flying, he stated, “They think it’s pretty cool.  A lot of them are excited for when I do actually get my license and I’m able to take them up flying.  So that’ll be pretty cool to be able to share that with them.”  When asked who he’ll take as his first passenger, Mason said possibly his friend, Trevin, who has only flown once before, many years ago.  Mason chuckled as he quipped, “He says he’s not nervous, but…”  Mason added that another friend, Brent Kohn, has a flight simulator in his home, and that’s been a fun and helpful option to get extra “flying” practice.

Mason made a point of thanking two people who have been particularly helpful in his pursuit of aviation.  Kyle Nelson serves as Mason’s instructor, and Brent Kohn has been an “aviation mentor” as Mason has learned the fine points of being a pilot.  Mason explained that during most of his local flying, at uncontrolled airports (meaning there is no air traffic control tower), the various pilots in the air have to communicate via Common Traffic Advisory Frequency (CTAF) to assure safe distance between planes.

Mason’s plans after high school are to attend college and play football at the collegiate level, while majoring in Business Administration.  He also plans to continue flying throughout his college years.  Asked if he wishes to pursue flying as a profession or simply as a lifelong hobby, Mason was unsure.  He said if an opportunity to fly professionally were to come along, he’d be happy to consider it.  In either case, it’s clear that Mason’s a young man whose future is ready for takeoff.