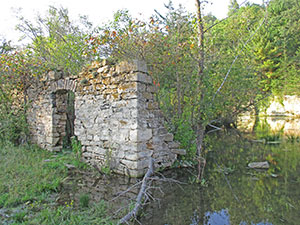 By Laura Deering and

My hands trembled as I read a personally hand-typed document from decades ago.  It read, “They hid them in caves.”

Recently this document was discovered while researching the connection of the underground railroad and the effect the Mississippi River had on the movement of slaves seeking freedom, while investigating the river town of Brownsville, Minn.

During my visit to Brownsville, I met with Rich Cordes with the Houston County Historical Society.  He also serves as a custodian to the caves in Brownsville.  Cordes was the trifecta of a host; having access, historical knowledge, and a helpful can-do personality.

We looked at four caves along the Mississippi River, directly across from where the steamboats and river vessels used to dock.  Today the caves can be seen heading south on highway 26 on the right side, carved into the auburn limestone bluff.  Cordes unlocked the doors of two caves, both which have large circular breathing holes in the ceiling.  In the rear of the sizeable caves are chiseled shelf/bench areas, which Cordes believes were used for storing produce such as apples and potatoes.  Thankfully, due to the breathing holes, the caves were not damp nor musty.

I was struck by the expansive width of the breathing holes.  It reminded me of nearby Rushford, Minn., with its known underground railroad safehouse.  Its access to the hidden room under the kitchen was via a narrow passage, likely needing a rope to get up and down.  Cordes then shared his knowledge of other caves, some on private property.  He described one of them having a breathing hole with what appears to be chiseled spiral steps within the hole.

As described by the National Parks Service, the Mississippi River was a major escape route used by slaves. This was due to travel on waterways being the primary mode of transportation.  Often southern plantation owners would head north by steamboat to the Twin Cities during the summer, to enjoy the cooler weather.  Commonly, they brought their slaves in tow on their journey.  Unknowingly, they were presenting an opportunity for their slaves to escape.   As well, slaves seeking freedom used a variety of riverboats, hidden underneath cargo and tarps, aided by those who were against slavery.  The goal was to reach Canada to be totally free.

Brownsville was the first natural boat landing in the upper Mississippi River region.  Here is where water vessels after a long journey plying north would stop to drop off or pick up passengers and goods.  It is also where early settlers would register their land deed for nearly the entire southeast portion of Minnesota.  During its heyday, close to 1,000 people lived in this bustling water town.  With its hustle of people coming and going, cave geography, and most importantly being perched on the Mississippi River, made it an excellent backdrop for the underground railroad.

Safehouses on the underground railroad varied from houses, barns, or caves.  At any point, the routes would incur changes due to slave hunters in the area or dangerous weather.  This made Brownsville a probable jumping off point if trouble laid ahead upstream.  Here were caves to hide, along with tributary river access further into the interior of Minnesota.  From Brownsville was a Native American trail that connected to the Root River, which led to Houston, Minn., where the letter described the cave hiding place.  The next town along the river was Rushford.  Brownsville, after further research, became an even stronger candidate due to several more factors.  For starters early Brownsville appeared to have been sympathetic to Black community members.

Before Minnesota was a state, Joseph Taylor, a Black man, resided in Brownsville, Minn., where he worked as a newspaper pressman.  Taylor’s journey to our corner of the state was accelerated when, in 1837, he witnessed the murder of his employer, the Rev. Elijah Lovejoy, in Illinois.

Lovejoy owned an anti-slavery newspaper.  One night a violent pro-slavery mob set fire to his office and killed the reverend.  Watching from afar was Taylor, who saw where the crowd threw the printing press into the river.  He later assisted with its retrieval.  The infamous printing press and Taylor settled in Brownsville (source History of Houston County, Minn).

Perhaps Taylor used the same ploy convincing slaves bid for freedom, as did Harriet Tubman.  She would immerse herself among slaves and whisper to them, if they wanted to escape, to meet her at a certain time and place.  With the slaves retrieving produce from the caves, the Brownsville setup would have provided the perfect opportunity to engage them.  Often the plantation owners would later discover, after departure, their slave was no longer on the steamboat.

Taylor was considered the best pressman along the Mississippi River from Dubuque, Iowa, to St. Paul, Minn.  Often, he would stop at a nearby river hamlet to give the local printer a rest.  Given his generous personality, Taylor added to Brownsville prominence along the Mississippi River corridor.  Taylor must have found a deep satisfaction when he was able, as a Black man, to join the Minnesota Union Army later in the Civil War.  Sadly, his dream of helping others find freedom was short lived, as he died from disease during the last days of the war.

Letter serves as clue to next stop – Houston, Minn.

Regarding the recently discovered document, research tied it to Houston’s town founder and Civil War soldier, W.G. McSpadden.  To learn more and in hopes of finding the cave, it required an on-site visit to where he used to live in Houston, Minn.  My tour guide and gracious host to the property was Mark Witt.  The farm resides with the Witt family and after many years, one gets to know the lay of the land and its history.  We visited the old mill on the property, where it once reigned on Silver Creek.  The creek proudly displays its bold limestone walls and ledges, along with inviting openings and crevices.

Witt heard about the cave and his attempts to find it remain elusive, a testimony to it being a safe hiding spot.  Witt shared a dark moment decades ago when the McSpadden residence burned to the ground.  While helping the owner at the time with cleanup, it revealed a hidden room under the kitchen.   Witt’s first thought was that of a secret room for the underground railroad.  When I shared the document of McSpadden aiding slaves, it all seemed to come together.

Putting the pieces together and checking off the boxes reveals our region’s contribution in being a part of the underground railroad network.  Access to the Mississippi River was key, along with sympathetic town folk and limestone caves, as well as tributary rivers such as the Root River connecting to Rushford with its safehouse.  Brownsville matched the setting as documented by one of the most detailed recollections of Minnesota’s role in the underground railroad by a 63-year-old Black man named Joseph Farr, who worked as a steamboat porter in Galena, Ill.  Interviewed years ago, Farr told a St. Paul reporter the network came up with “all kind of schemes to separate slaves from their owners and sneak them onto riverboats.”

There is still much to discover of southeast Minnesota role in the underground railroad.  Much of it was a challenge, due to at the time, documenting people and places would endanger others, including imprisonment for aiding a slave.  What we do know is the Mississippi River played a significant role;  that slaves reached the Rushford safehouse and then continued their journey north on Slave Road, so named being the trail of escaping slaves.  Thanks to Farr, we know some of them made it as far to the Twin Cities.  Ultimately many found their way following the north star to freedom.