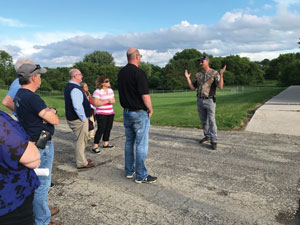 Library Director Jenny Simon informed the council that, “It’s been a long month.  We’re dry now at the library, after our rain/flood event.  We were closed for a week.”  She went on to explain that the library’s summer programs are now up and running smoothly.  She said a few minor repairs are still ongoing at the library, such as replacing some ceiling tiles.

Also regarding the recent heavy rain/flood event of June 15, Aaron Hamersma reported that, at the wastewater treatment plant, “We were up at 1.8 million gallons coming in (per day)… I think I got called in about 8:30 that night…I left the plant at about 3:30 a.m.” He added that things haven’t yet returned to “normal,” adding, “We have extra flow, but the plant’s handling it.”

Reporting on the ambulance crew, Sue Puffer said they are seven calls ahead of this point last year.  Jessy Betts reported on the sheriff’s department, stating, “With getting the two new additions in Spring Valley settled in, we’re now back at full staff for the sheriff’s office.”  He also submitted a written report of the department’s activities for the city throughout the month of May.  It includes a total of 228 calls/incidents.  Included in this total were a large number of general traffic stops and unspecified civil matters, six animal complaints, five vehicular crashes, three trespassing calls, two drug calls, two gas drive-offs, and one illegal dumping report.

The council approved a request for street closures, a dance permit, fireworks permit, and a temporary liquor license, all for the upcoming Ag Days event.  The street closures include barricades to allow the parade to run on Broadway Avenue and Main Street, as well as fencing and barricades for the street dance to be held on Broadway Avenue.  There will also be barricades during the fireworks and Big Wheel races.  The council stipulated that the temporary liquor license was approved, contingent upon all applicable paperwork being turned in to the city administrator.

Luan Ruesink stated, “I just wanted a reminder to residents, when they’re mowing their lawns, not to blow grass into the street.  It’s very dangerous for motorcycle riders and bicyclists.”  Parks Director John Fenske reported, “We haven’t had to put water in the pool for four days.  Last year, we were putting 7,000 gallons a day n.  So that’s a pretty good fix.”  Mayor Archer made a public thanks for all who helped at the library, and to all of the individuals and crews who responded during the June 15 flooding.

Following all of the regular business, the council adjourned briefly to travel to the city’s wastewater treatment plant (WWTP).  Once there, Aaron Hamersma gave a tour of the facility and explained the basic workings.  He said the WWTP has been operating since 1987, and that someone comes to the plant 365 days a year to check that it is operating as expected.

In discussing the recent heavy rains and flooding, Hamersma passed around charts showing “normal operations” at the WWTP as well as during the June 15/16 event.  He said that normally, the WWTP receives about 200,000 gallons of water per day, but that during the rain and flooding, it reached a peak rate of 1.88 million gallons per day.  He stated that this creates a lot of extra wear and tear on the pumps and the system, as well as increased electricity usage.  He said the problem is excess ground water coming in, and that once things return to normal, they can begin looking to find the places where the water came into the system, so that can be remedied.

In explaining how the WWTP works, Hamersma said, “This is a completely biological plant.  We’re not injecting any chemicals.  It’s just naturally occurring bugs that do all the work.”  He led the council through the various buildings and treatment stations, and ended by showing how water is released into the trout stream.

The next regular meeting of the council will be Monday, July 8 at 6 p.m.  As always, the public is welcome.