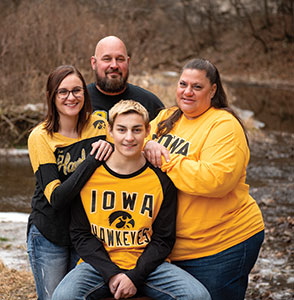 “Shock” and “devastation” are the words that Kindra Soltau uses to describe the feeling she got after her 17-year-old son Wesley’s recent diagnosis with Hodgkin’s lymphoma, a cancer that attacks the lymphatic system.

LeRoy-Ostrander High School junior Wesley Soltau’s cancer journey started back in December of 2020 when his girlfriend Ashley noticed a lump on his neck. “She looked at his neck and noticed that it looked funny,” said Kindra, “and it went from there, a two- or three-week whirlwind.” After appointments, tests, and scans nearly every day for a week, Wesley was officially diagnosed with stage 3 Hodgkin’s lymphoma on January 7. Wesley is now nearly two months into his treatment, a combination of chemotherapy and a clinical trial to hopefully lessen his side effects and boost his immune system. And while Wesley may be the one with cancer, he hardly feels alone.

Since Wesley’s diagnosis, the community surrounding him has grown. Support has come in many ways, but most noticeable is the #SoltauStrong merchandise being sold. Wrestling teams across the area are buying t-shirts for practice. Outside of his own team, the GMLOS Bulldogs, schools “from Chatfield to Dover-Eyota to Fillmore Central” are supporting his fight against cancer,” says Jason Soltau, Wesley’s dad, “section 1A has really stepped up to help support.” When talking about the support he receives from his wrestling community, Wesley says it’s been great to know that “people you haven’t talked to in years are there for you.”

And the support doesn’t stop there. It spans much farther than the tight-knit wrestling community. His friends, teachers, and community members that he doesn’t know have reached out to offer support through messages, donations, and prayers. Without the support of his community, Wesley says he’d feel like he was going through this alone. “It shows there are people who are going to fight this with me. It’s something that I’ve loved, they are here for me too

. If it was someone else, I would be doing this too.”

Wesley has had to sit on the sidelines this wrestling season, but that doesn’t stop him from attending practices and meets when he can. “He goes to be with the guys he’s been with since he was a kid,” says Jason Soltau, “for moral support.” The Soltau family is trying to get to as many wrestling matches as they can, to show thanks for all of those who have supported their family through this difficult journey.

Wrestling is known as a mentally grueling sport. Growing up wrestling, Wesley has had to develop a tough mentality, and that has certainly helped him through his cancer journey in more ways than one. In wrestling, Jason says, “The times that he didn’t want to go to practice would be followed by some of his best matches.” He adds, “You’re gonna have a bad day, you still have to fight.” Jason says that being in wrestling, you know how you’re going to attack different matches, and that they have to trust that the doctors know how to attack this.

When asked what advice he would give to others, Wesley says, “To keep fighting through everything, it sucks right away and still sucks, but it will get better. There will be days where you’re feeling fine and that will give you a little boost to keep going. Don’t hang your head on anything.”

If you are interested in supporting Wesley and his family, the following options are available:

•Soltau Strong t-shirts can be purchased from C&M Screen Printing in Stewartville by calling Todd at (507) 533-9201.

•Donations can be made to the First National Bank in LeRoy in an account made in Wesley’s name and nicknamed SoltauStrong.

•If you would like to send something directly to the Soltau family, their address is 183 Penny Lane, LeRoy, Minn. 55951, or via Venmo at @KindraSoltau.