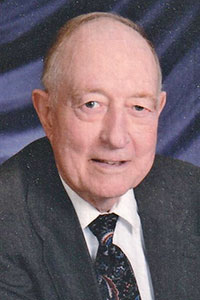 Rodney Dean Skare was born November 8, 1935, in Spring Valley, Minn., Fillmore County to Verna Guy Skare. He attended school in Spring Valley and graduated in 1953. Following graduation he attended Austin Area Vocational School, graduating with a degree in electronics in 1955. He enlisted in the United States Air Force in January 1956 and was discharged in September 1959, then was employed at IBM until his early retirement in 1990. In 1992 he was employed at Seneca Foods in Rochester, Minn., as an electronic tech and retired in 1998. In 1960 he was united in marriage to Carol Affeldt at St John’s Lutheran Church in Wykoff.

He was a member of St. John’s Lutheran Church in Wykoff, Minn., where he served as an elder, taught Sunday School and sang in the choir for many years. He also served as a volunteer instructor in firearm safety for the State of Minnesota for 52 years in Spring Valley, Minn., retiring in 2012.

He enjoyed fishing at the cabin up north, deer hunting with his family, watching his grandson’s sporting events and truly had great fun with his grandchildren and great-grandchildren.

He was preceded in death by an infant son, Allan; his stepfather Lloyd Lillie, his mother Verna Lillie and a brother, Gerald Skare.

Services will be held 2 p.m. Friday, April 16, 2021, at St John’s Lutheran Church in Wykoff, with Pastor Michael Harman officiating. Burial will be in the church cemetery following the service. Visitation will be held 4-7 p.m. on Thursday April 15, 2021, at the Hindt Funeral Home in Spring Valley.