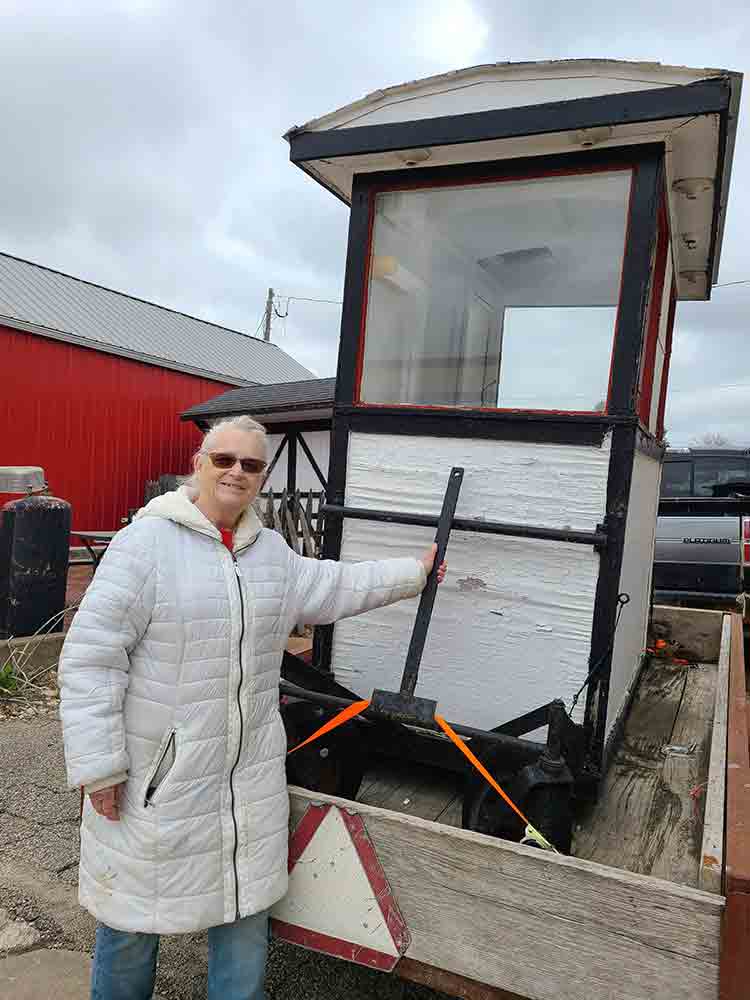 “Peanuts, popcorn, cracker jacks!” Della Marie Jetson Mehaffey can still hear her Grandpa Linstroth calling out those words to attract customers to his popcorn stand. “I’m not sure where the cracker jacks came from,” she laughed. She remembers the popcorn and the peanuts, but doesn’t recall him ever selling cracker jacks.

Francis Linstroth grew up in Preston and moved to Harmony as an adult. He went to college to learn interior woodworking, which served him well in his future ventures. He and two of his brothers were painters at the Mayo Clinic and St. Mary’s Hospital for a time. During the depression, he purchased an old home on a corner lot in Harmony and renovated it for his family of seven to live in. “It was so neat inside,” Della said about her visits to her grandparents’ home. As a child, she used to climb into a large built-in drawer in the boys’ room and hide.

Della describes her grandpa as a resourceful entrepreneur who kept himself busy. After World War I, he got out of the service and began working a variety of small jobs. During Prohibition, he even set up a still in his basement and made different kinds of wine. Della remembers going out with her siblings to collect piles and piles of dandelions for him to use for his dandelion wine. Grandpa Linstroth also raised chickens for a time until a bird flu came through and killed them all. Nonplussed, he moved to growing blackberries which Della remembers as some of the biggest ones she’d ever seen. “And then he got into the popcorn wagon,” she said.

The popcorn stands were the venture of her grandpa’s that she remembers the best and most fondly. Grandpa Linstroth built two of them by himself, even modifying equipment to make the most of the limited space in the stands. One, a stationary popcorn stand that resembled a small shed and was painted red and black, was located in Harmony across from the Jem Theatre. It is no longer standing. The other popcorn stand, a mobile wagon that could be moved to different locations, was still in use just a year ago. On Saturday nights, Della would go with her Grandpa to work in the popcorn wagon and got paid a quarter a night. “My math skills were really good as a child from working at the stand,” she said. During the week of the Fillmore County Fair, Linstroth would park his wagon next to the grandstand and sell popcorn all week. “Grandpa was really proud to be down at the fair,” Della explained. The demand for his popcorn was so high during that week that Della wasn’t allowed to go along since she wasn’t fast enough yet to keep up with the long lines of customers. “I go to the fair now and I don’t see my popcorn stand,” she said. “I miss it.”

When Grandpa Linstroth finally retired from the popcorn stands, Della’s parents kept them running and she and her siblings continued to work in them. When they divorced, the popcorn stands ended up in Della’s dad’s possession as her mom was a busy bar owner and didn’t have time to run them. When he decided to retire from them, the Harmony stand closed down and the Preston popcorn wagon ended up with a new owner. Dianne Ruud ran it in Preston for many years, naming it The Old Maid. Several years ago, Della asked Dianne if she could buy it back from her. “I went to her and said, ‘I really want that popcorn stand. It has family history.’” Dianne wasn’t ready to sell it and so she turned her down. When Dianne passed away in 2021, Mike and Brenda Eickhoff, owners of the Sweet Stop and Sandwich Shoppe, bought the property next to their shop, which included the popcorn wagon. Della visited the new owners and asked if they would consider letting her have the wagon so it could be returned to her family. “They said it would be best to go back home to family,” she said. “I can’t thank them enough!”

She was ecstatic to finally be owning her Grandpa Linstroth’s popcorn wagon again with all of its memories.

On May 2, 2022, the popcorn wagon was officially moved from its long-time spot next to the Sweet Stop and taken to Della’s home. She’s preparing to restore it and knows that it will need a lot of work before it’s back to its original state. It needs to be stripped and repainted, all four tires replaced, interior redone, and more. Della’s not sure what she’s going to do with the wagon yet but is looking into the possibility of running it as a popcorn stand again. Licensing it for food service could be tricky though since she was told that she would have to install a double stainless steel sink with running water in the wagon first, an impossible feat due to space. She’s not giving up though and is continuing to research options. “If nothing else, I’ll set it up as a museum,” Della said about the popcorn wagon. “I’m going to try to keep it in the family. Now that I got it, I’m proud of it.”