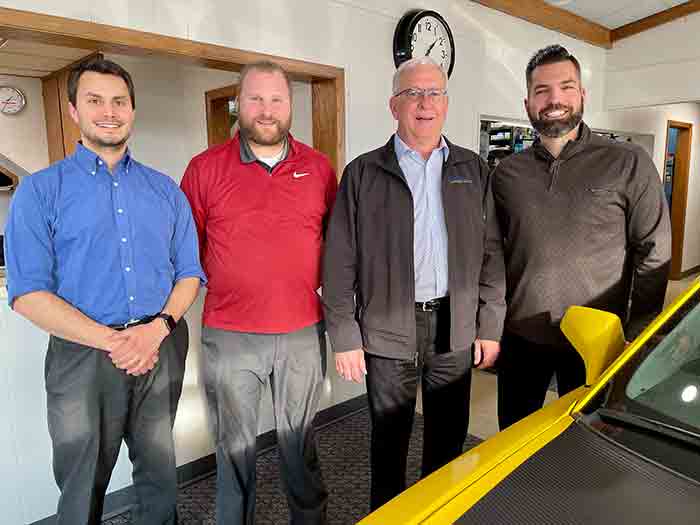 When Rochester-based Penz Automotive Group purchased the Buick Chevrolet store in Spring Valley earlier this year, owner Todd Penz and his team immediately focused on becoming involved in the community.

“I love it here,” Stockinger says, who lives in Rochester. “I’m familiar with Spring Valley, my dad sold waxes and polishes here for 37 years, so I recognize people and names.”

And Gregor has already developed an affinity for grabbing a meal at Big Bob’s, because, “well, I’m Bob,” he says with a chuckle.

Penz Automotive Group includes three dealerships in Rochester. The company’s roots date back to 2017, when Penz – who has been in the car business since 2009 – purchased the Subaru dealership and two years later the Buick GMC and Nissan dealerships to form the Group.

“My in-laws live in Cedar Falls, Iowa, and I have driven past this store on my way from Rochester for 13 years. I started my career selling Chevys, and now the store became available,” he says.

The Group now employs 175 people, including 12 in Spring Valley.

Penz says the addition of the Spring Valley store complements the Buick GMC store in Rochester.

“We get a lot of customers who look at Sierras and Silverados. Until now, we could only get them the price and value on a Sierra but not on a Silverado. Now we can do that,” he explains.

Penz and his team have been on a mission to address some of the negative connotations that can come with the car buying experience, according to Jacob Wessel, who is the director of marketing.

“We want to eradicate the negative stigmas associated with the car businesses. A lot of that is based on transparency, involvement in the community and doing businesses in an honest and effective way,” he says.

He brings up the example of customers, who often don’t know what’s going on at a car dealership, when the sales person disappears for a while.

As a result, Penz recreated its sales process three years ago to focus on being more transparent with customers.

“It takes a while when you have 175 employees, but we’re getting there through honesty, integrity and doing the right things,” Penz says.

For Stockinger, that process begins with the initial conversation with the customer, which is based on a needs and wants list to figure out the best vehicle for them.

“We want to make the most efficient use of their time rather than just walking around the lot looking at cars,” he says.

Plans are now in the works to move the dealership down the road to the former Grafe Building, which also once housed the Peterson Ford dealership. Penz is working with General Motors on the design, and he hopes to start construction next year. Wessel adds that another goal is to create a system that allows customers to fully buy a car online, including the completion of the necessary paperwork.

While the stage is set to take the Spring Valley dealership to the next level, Penz’s team won’t lose focus on maintaining the small-town roots locals have come to appreciate.

“I want them to have that small town feeling, so they know us by first name, and they’re comfortable coming here,” says Stockinger.

“We’re intertwining with the community and it’s been nice to see community member express that they’re happy that we’re here,” Gregor adds.