When she was nine or 10 years old, her parents thought she was old enough to handle the rifle that she and her siblings would use to scare the blackbirds out of the family cornfields in the Root River valley near Hokah. The late Josephine “Josie” (Lorenz) Gavin reminisced about her childhood in the 1940s. The children took turns with farm chores – one of which in the late summer and autumn, was cornfield duty on foot with a Winchester that weighed over seven pounds. “We had to stop and rest a few times while circling the fields” she recalled, “We climbed into a high tree stand to see where the blackbirds were; we didn’t do any unnecessary shooting.”

To get to the farthest cornfield, the children had to walk through the woods and then past a pasture where a neighbor kept wild horses. “When we fired to scare away the blackbirds, the horses would stand on their hind legs and let out the loudest scream I have ever heard! Needless to say, we didn’t stick around there any longer than we had to. When the blackbirds flew, we did, too.”

The Lorenz corn crop, due to being the most extensive, provided the primary bird buffet. “Most of our neighbors didn’t circle their cornfields the way we did, three or four times day. The cobs of corn in their fields were only half full, and the blackbirds’ stomachs were full!” 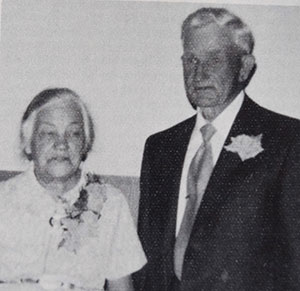 During one especially busy blackbird season, Gavin remembers shooting up more than $100 worth of ammunition. It cost 25 cents to purchase two boxes of 50 shells each. “Do your multiplication on that, and that’s a lot of shooting. We shot the barrel out of the Winchester 22 – there was no bore left in the barrel. “

Eventually, blackbird duty on foot with firearms was no longer necessary – after rifles were replaced with gas guns that fired periodically. Telling the story in 2001, Gavin said, “To this day, you can hear them going off in the Root River Valley.” It appears the automated gas guns were more often used in the river valleys than on the ridges. They are no longer stocked on Hokah store shelves, but they are still available on websites.

Blackbird scaring was a seasonal chore, which began in August, “because the birds could do the most damage before the kernels of corn had hardened on the cobs.” However, farm chores kept parents and children busy all year. “My dad had the honor of shoveling the manure out of the cow and horse, hog, and chicken barns. At milking time, he milked most of the cows and carried the heavy milk cans to the flowing well water tank to cool.”

Gavin said, “In all the years I knew them, I never saw my mother or dad sitting and doing nothing. My mother was mending or sewing when she sat down, and my dad was learning to read from his Popular Mechanics magazine. That was their break in the work day.”

Her mother was also the organizer, writing a list of chores for the children every day. Gavin remembers the childhood chores taking only 10 to 15 minutes each day, but there was plenty accomplished. She and her three sisters and two brothers took turns. “We fed and watered the chickens and picked up the eggs. The old hens might not want to get off the nest and would try to peck us on the hand.”

Corn would be gathered from the corncrib to feed the pigs. They would throw hay down from the hayloft for the horses and cows. A couple of cows would be milked, of course by hand. Without running water, they had to carry water into the house along with wood.

“One or the other parent was always around while we were choring to do the things we weren’t able to do. For instance, they would put hay in the horse manger. The horses were very tall and had very big feet, so there was danger they might step on our feet.

“My parents were very wise and saw to it that we had time for fun things, like playing baseball, skating, fishing or reading.”