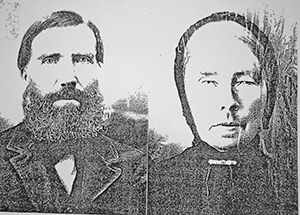 Ole Olsen Sandness assumed responsibility for his five-year-old niece during a cholera-stricken voyage from Norway to America in 1854. His father, brother and sister-in-law were buried at sea. Ole, a single man at age 37, and young Alava would complete the ocean crossing and eventually settle in Wilmington Township, Houston County.

What was certain to be a life-changing voyage might also be a life-ending or life-beginning experience. Eventual Riceford residents, Ole and Ronoug Gunderson (later Treangen) and their four children left Norway in 1867 on a ship with 410 passengers but arrived in North America with 408; four had died and two had been born.

In the second half of the 1800s, most Norwegian emigrants were tenant farmers who felt their only hope for owning land lay across the Atlantic Ocean. But uncertainty prevailed from the decision-making in Norway to land-ownership in Houston County or Fillmore County in Minnesota.

Opportunity was anticipated, but guarantees were folly. Determined by weather, the length of the ocean voyage on a sailing ship could vary by many weeks, even months. The average crossing between 1840 and 1874 was 53 days. The quickest crossing reported was 25 days, but it could take 100 days.

A Norwegian “contract ticket” in 1848 required emigrants to provide food for 12 weeks, the ship supplying only water and cooking fuel. Food was prepared on the limited number of galley stoves on deck. Lines for preparing meals could be long. For washing, collected rain water was preferred, but not as available as saltwater.

Passengers were housed below deck with descent and ascent through hatches on ladders. Ceiling height could be six to eight feet. Ventilation was only through vents that, like the hatches, had to be closed during bad weather to prevent the ship from taking on water. These vents might also be the only source of light. Due to the fire hazard, oil lamps could not be used during bad weather, so emigrants endured storms packed together in complete darkness.

Prolonged bad weather was thus a health hazard, since seasickness was more prevalent during bad weather. Vomit and worse could render the air and floor almost intolerable. Toilet facilities were often quite poor, if not non-existent. The stench below could be stifling. They sometimes purified the air with a red-hot iron that was dipped into a bucket of tar, from which the smoke and steam helped deaden the stench. Steam from chlorine and vinegar might also be used.

Most travel accounts of sailing mentioned seasickness. Barbru Kinneberg told of being so seasick that she was unable to eat for six weeks and feared she might never experience life in America. But she was able to regain robust health and would eventually reside in Wilmington Township.

It was best to keep passengers above deck as much as possible, especially those who were seasick. There was a doctor on board only if a Norwegian physician was traveling to America to study or settle. The skipper usually had a medicine chest and attempted to treat those with headaches or loose bowels. The latter condition caused fear that dysentery that might break out. Another much-feared contagious disease, “ship’s fever,” was probably typhoid fever. Cholera, measles and chicken pox were also common. Such diseases were hard to control, since there was rarely a sickroom where the infected could be isolated. The elderly and young children had the least resistance to hardship and disease.

In the great emigration year of 1861, about 200 people died in passage. Burials took place at sea with bodies wrapped in canvas or in caskets if the ship carpenter had enough lumber. Sometimes two bodies were placed in the same coffin with feet in opposite directions. If no minister was on board, the skipper performed the last rites, the flag was lowered to half mast, and the corpse was lowered into the sea. When there were many deaths and a shortage of caskets, sharks were known to follow ships, and passengers witnessed canvas-wrapped bodies of loved ones being devoured in the water.

Weather permitting, the passengers were usually up on deck, maybe busy cleaning and sometimes playing games. More will follow about enjoyable and even festive activities.

Much of this information came from the University of Minnesota English-language publication, “Norway to America; A History of the Migration” by Ingrid Semmingsen.