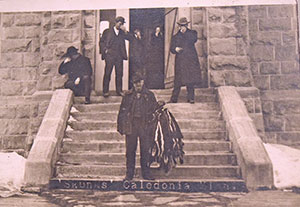 Caledonia took pride having one of the best markets for raw furs in southern Minnesota, according to the Caledonia Journal in 1911. Houston County native Dell Stewart, launched his fur-buying business about 1899 and was well known by every trapper and hunter in the county. He paid the same commission price as would any fur house. He was credited with always giving “a man a square deal.”

But it was not always “a man” manning traps, according to Josephine “Josie” Gavin, who at a young age, learned her way around Root River Valley fauna from her father, Joseph Lorenz. She recalled a wide variety of wildlife except for whitetail deer, which were just making a comeback in southeast Minnesota in the late 1930s and ‘40s. With all the area having been settled, the deer were no longer a major food source – replaced by farm-raised pigs, chickens, cattle, ducks and geese.

Family farmers took on odd jobs to make a little extra money. Her father hauled cattle in a 1928 truck and sharpened crosscut saws for $2.50. He also hunted racoons and squirrels in addition to trapping muskrats and mink in season. When Josie and her siblings were able to participate, he taught them to fish the Old Root River and set lines for catfish in the New Root River.

“Trapping was more exciting than hunting,” she related. “You never knew what might be in the trap. It could be a muskrat, mink, ferret or a chicken hawk that got too nosey if the trap was not properly submerged. We usually carried the rifle in case we got a mink. Mink are mean creatures when they are in a trap; muskrats are more benign.”

Trapping began with cleaning the traps and testing them to make sure they would spring, even when triggered by very little weight on them. The muskrat season lasted about a month, starting in early November when it was cold enough for ice to form on the Old Root River. Her father usually accompanied the kids on the season’s first trap-setting excursion. “He could spot the most-used runways more quickly than we could,” she added.

In the runways, they set traps in about four-inches of water with the stake holding the trap in deeper water. “That way, the rat would drown quickly and not be frozen in so tight that we couldn’t get it out.”

The children always wore warm clothing and took large, heavy rubber gloves to wear while setting traps in the near-freezing water or pulling the trap out. Sometimes the rubber gloves “sprung a leak,” and “the one sticking his hand in the freezing water went home mighty cold!”

After the first setting, Josie’s year-younger brother was her trapping partner. They usually checked traps about 6 a.m. and then again after school, intentionally before it became dark. In the early-morning darkness, they usually carried a flashlight, used only when necessary. “Batteries were expensive.”

Their father skinned the muskrats as soon as possible and then turned the hides inside out and pulled them onto a board to stretch them. “That way, the skin or hide could dry a little and not rot if the weather got warm.” He had pre-cut scraps of lumber about the size of a muskrat.

A muskrat hide brought anywhere from $1.50 for smaller ones up to $3.50 for larger ones. A 30-muskrat season was good. “Once, we caught a very black mink, and that one brought $60! A lot of money in the ‘40s when we could buy a pair of shoes for $2.  We kept busy and got praised to high heaven for being “good little trappers” – with a lot of coaching.”

Josie (1933-2020) would later become a mother of six. Her obituary read, “She learned early on that to be with family, it was going to involve outdoor activities”… “She took all the grandkids fishing as often as possible”… “She was one of the first females to hunt with an all-male, deer-hunting party in the late 1960s”… “She even won a local turkey-calling contest”… “She prepared a wild game feast with pheasant, duck, venison and a variety of animals that shouldn’t have been cooked.”