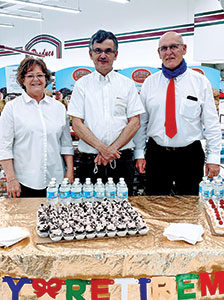 Jeff Fowler retired! Fowler hung up his crisp white shirt, Friday, April 30, after 52 years in the retail business. He spent his entire career in Spring Valley, a community of 2,479, working in three locations for three bosses.

Dwayne (Squeak) Seeley, owner of Squeak’s IGA, hired 15-year-old Fowler in 1969, who began his career carrying out groceries for the residents of his hometown.

In 1978, Don and Jan Lanning purchased the downtown IGA store, becoming Don’s Family Market. Fowler was already the assistant manager and a great help to Lanning.

“We hit it off, always had a good relationship, became friends, and still talk to this day,” explained Lanning. “Jeff has lots of friends in the area. His father and grandfather are from this area.”

Lanning sold the stores and retired in 2011. Linda and Vern Bennett are not only managers but part-owners in Sunshine Foods. The pair have worked with Fowler for the last 10 years.

Linda Bennet proudly explained that Fowler has worked at the same place, and it is the only job he has ever had. “One job, one place.” Bennet pointed out Fowler’s mantra, “Everydays a holiday” on a sign alongside a photo from his days with Don’s Family Market.

What an accomplishment! To which Fowler immediately replied, “No one else would have me. I had to stay. Now Linda is throwing me out.”

Fowler confirmed that it is the only job he has ever had. “Three bosses, three stores.”

Why did you stay? “I love retail,” explained Fowler. “I enjoy building displays and talking to people. People are the best part.”

What is the most significant change you have seen? Technology.

COVID-19 is quite the ending to a lengthy career and to end it as an essential worker. “Knock on wood. No one in our store caught it. Forty-five, 50 employees, and no one had it.”

Fowler offered the following advice for younger people “Work hard; you will get some place. Don’t be afraid of work.”

Balloons, banners, cupcakes, and photos are all necessary ingredients for a successful retirement party but sharing stories is the best.

There were several grocery stores in Spring Valley at the time Fowler was in high school. Mrs. Ruth Franke, Spring Valley High School teacher, had a conversation with the owner of the IGA store and told him he would do good to hire Fowler. The two agreed that whichever store hired him would succeed. Today, the store Fowler manages is the only grocery store left in operation in Spring Valley.

Joe Bezdicek, Spring Valley High School teacher, told the story of Fowler when he was in FFA during high school. FFA was selling Christmas trees to raise money. The trees needed to be cut off because they were too tall, and the branches were going to be thrown away. Fowler suggested they sell the branches, so they did. The students raised as much money selling branches as they did selling the trees. Bezdicek said Fowler would do well in business.

Protégé and Sunshine Foods manager, Greg Bernard shared, “Fowler has so much knowledge of the grocery industry or business in general. I was truly fortunate he took me under his wing, so to speak, and shared that knowledge.”

“Can’t sell out of an empty wagon.”  (Meaning keep the store full of product).

As Fowler did, Bernard started in the grocery business at 15 years old and worked for Fowler through high school and college, which is the same scenario for the manager over in Chatfield. Bernard explained, “We worked underneath him, and he showed us the ropes. Jeff worked with me and went above and beyond for those who showed an interest. I came back after college and still wanted to work in the grocery business. I worked for nine years at the Dodge City and was ready to move back closer to home.”

“Fowler is a good friend. I am sure he will get some calls from me from time to time. He started as my boss 16 years ago and turned into a great lifelong friend. I wish him nothing but the best in his retirement,” explained Bernard.

We could not agree with Bernard more. The Fillmore County Journal and its readers wish Fowler the best and look forward to seeing where your journey takes you.