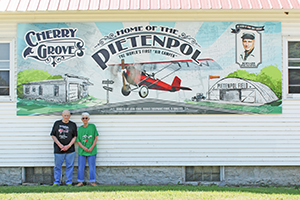 “We just thought there had to be some way to keep this legend alive,” Bernis Finke said. “Between the two of us, we decided something needed to be done.” She and her husband John Finke grew up watching Pietenpol airplanes being built and flown in Cherry Grove and are concerned about that important part of Cherry Grove’s history being forgotten. While trying to come up with a way to keep that from happening, they landed on the idea of a mural to commemorate the planes.

The Finkes each have personal ties to the Pietenpol airplanes,  so an interest in them is only natural. The planes were created by Cherry Grove native Bernard Pietenpol in the 1920s. Bernis’ father Orrin Hoopman, and John’s uncle Donald Finke both worked with Pietenpol and flew his planes. Hoopman’s plane, a 1931 Pietenpol airplane with a Model T Engine, is now on display at the Model T Ford Museum in Richmond, Ind.

At first, John and Bernis weren’t sure where to put a mural, but on the way to church one day, Bernis realized that the north side of the Cherry Grove Community Center would be the perfect spot. The next step was finding someone to create the mural. They ended up hiring National Fleet Graphics, LLC from Dodge Center for the job. The completed mural, measuring seven feet high by 20 feet wide, was installed on June 4. The Finkes and their family are accepting donations to help cover the costs of the mural as well as for future repairs and touch-ups.

Like many of that time period, Pietenpol only had an eighth grade education, but that didn’t stop him from designing and building his own style of airplane with Hoopman and Finke’s help. It took some trial and error, but after several failures, Pietenpol finally had a working airplane that he could pilot himself. He and Finke successfully flew together in a two-seater airplane on September 1, 1927, that operated with a 30 horsepower Model-T engine. Around that time, Ford Model A cars were becoming more popular and they ran on a bigger four cylinder engine with 40 horsepower so Pietenpol decided to convert one of them for his airplane, which he called an Air Camper. The Air Camper first took off in May of 1929. “It was a light plane,” John explained. “It handled really easily if you knew what you were doing.”

Pietenpol’s planes could have have remained somewhat unknown to the world in general, but in 1930, he saw an article in the Modern Mechanics magazine in which the writer, Weston Farmer, firmly stated that automobile engines

wouldn’t work in an airplane. Pietenpol knew that it actually was possible because he’d been doing it for several years by that time, so he wrote to Farmer to inform him of that fact. “When the editor wrote back, he said, ‘Ok, prove it. Fly ‘em up here. I want to see them,’” Bernis shared.

Pietenpol agreed, but there was one problem. He didn’t actually have any plans or blueprints drawn out. Hoopman then ordered a set of drafting tools through the mail for $4.50, taught himself how to use them, and drafted the blueprints backwards since the planes were already built. After that, the Air Camper was promoted in a series in the Modern Mechanics magazine, and Cherry Grove was officially on the aviation map. The plans for building a plane sold for $7.50 and by 1940, over 6,000 sets had been purchased. The blueprints are still being sold by the Pietenpol family today.

During World War II, Pietenpol was sent to Iowa to be a pilot instructor, despite being self-taught with no formal training. Finke, one of his original flying students from when he first started building airplanes, also taught how to pilot during WWII, but for the Canadian Airforce.

Today, builders and owners of Pietenpol planes from around the world gather once a year at Brodhead Airport near Oshkosh, Wis., for their annual fly-in.  “It’s so neat that a little bird like Cherry Grove could be so famous,” Bernis said. She and John have traveled to the fly-in for the last 20 years and love seeing the Pietenpol planes still being built with car engines. Some of the planes are traditional Pietenpol airplanes while others are heavily modified. The Finkes also sell Pietenpol t-shirts during the event. They’ve sent t-shirts to New Zealand, Canada, and many other places around the globe.

Now that the mural honoring Cherry Grove’s unique history is up, Bernis plans to send a pictures of it to the Brodhead Pietenpol Association to print in their quarterly newsletter. She and John are mulling over the possibility of holding a dedication for the mural at some point, but would need some help to pull it off. “We just feel that the Pietenpol history is being forgotten and we wanted to renew it,” John said. “I don’t want it forgotten about, locally especially.”