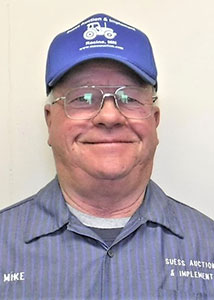 Michael “Mike” Suess, 69, a lifelong Stewartville, Minn., resident and area businessman, died peacefully in his sleep of cardiac arrest at his home on Monday September 13, 2021.  The funeral service for Mike will take place at 11 a.m. on Friday, September 17, 2021, at the Stewartville United Methodist Church, with Rev. Laura Nordstrom officiating.  Burial with military graveside honors by the Stewartville American Legion Post 164 will follow at Woodlawn Cemetery in Stewartville.

Michael Victor Suess was born on November 27, 1951, in Stewartville to John “Jack” and Patricia “Pat” (Thirtle) Suess. He grew up in Stewartville, attended school there, graduating from Stewartville H.S in 1969.  Mike was married on June 19, 1971, at the Stewartville United Methodist Church to Judy R. Sennert. He enlisted into the U.S. Army, serving two years as a mechanic.  The couple lived in Germany where Mike was stationed until his honorable discharge in 1973. They returned and lived in rural Stewartville and Mike and Judy worked with his parents at Suess Farm Equipment.  In 1983, Mike and Judy moved into Stewartville where they raised their children and continued to make their home. In 1985, they began Suess Auction and Implement, which they have operated together for 36 years. They moved the business location to Racine, Minn., in 1994.  Mike was a self-taught auctioneer and, with his family, held numerous consignment auctions. His business was a hub for farm machinery traders all over the country. He was a member of the Minnesota State Auctioneers Assn. and volunteered many hours auctioning fundraisers for several organizations, including Ducks Unlimited, Pheasants Forever, and Hayfield American Legion.  Mike enjoyed going on trips with his family, fishing and hunting, had a big vegetable garden, followed the MN Twins, and enjoyed going to his grandkids’ sporting and school activities.  He liked visiting with friends, neighbors, and his many customers, and loved spending time with his family, especially his grandchildren.

Mike is survived by his wife Judy of 50 years, his son Scot (Heather) of Rochester, and his daughter Alison (Tim) Hagen of Rochester, six grandchildren: Alliah, Cadyn, Jack, Emma, Maiyah, and Alivia; his brother Phil (Deb) Suess of rural Grand Meadow, Minn., and nieces and nephews.

He was preceded in death by his grandson Daniel and his parents.

A time of visitation for family and friends will take place from 4-7 p.m. on Thursday, September 16, 2021, at the United Methodist Church in Stewartville and one hour prior to the service on Friday morning. Arrangements are with Griffin-Gray Funeral Home in Stewartville. Online condolences and memories of Mike are welcome at www.griffin-gray.com.