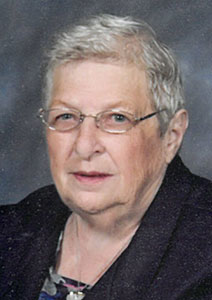 Mary Ann Anna Lammers (Juenger) went to her heavenly home on Tuesday, January 14, 2020. She had resided at the Stewartville Care Center since June 2019.

Mary Ann was born on June 13, 1926, to Joe and Ida Juenger in Stacyville, Iowa, where she grew up and attended school. In 1945 she married the love of her life, Frances “Frank” Lammers in Stacyville. They farmed in Adams, LeRoy, and Wykoff, Minn., before making their home in Preston, where Frank owned a Sinclair gas station and Mary Ann worked as a cook at the Branding Iron restaurant. After retirement they moved to Spring Valley. After Frank’s passing, Mary Ann lived in The Meadows assisted living in Grand Meadow before moving to Stewartville. Mary Ann enjoyed watching the Minnesota Twins and Vikings, playing bingo and cards, putting jigsaw puzzles together, and crocheting. In her younger years, she coached softball.

She was preceded in death by her husband Frank, daughter Natalie, son Bill, and nine siblings.

Funeral services for Mary Ann will be held at St. Columban Catholic Church in Preston, Minn., at 11 a.m. on Monday, January 20, 2020. Visitation will be held from 9:30-11 a.m. at the church prior to the service. Burial will be at a later date. Hindt-Hudek Funeral Home is assisting the family with arrangements.