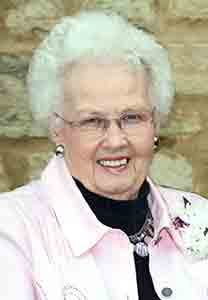 Marilyn Mabel Majors, 89, of Spring Valley, passed away peacefully at home surrounded by family on May 31, 2021. She was born on April 12, 1932, the only child of Herbert and Ruth Finke of Spring Valley. She attended school in Spring Valley and graduated in 1950 and later attended college in Winona.  She married her childhood sweetheart, John R. (Bob) Majors in 1952 and they made their home in Spring Valley.  They had four children.

Marilyn was a consummate homemaker, expert in cooking, decorating and keeping her family happy and connected.  She was the hub of the family and her home was the place of many family celebrations and the welcoming place to which family came home. She had a natural talent for singing and performed at many weddings and funerals throughout her lifetime.  She was a member of Faith United Methodist Church and the Red Hat Society and had many phone friends who kept her up-to-date. She and her husband, Bob, enjoyed several years of traveling the country in their motorhome after his retirement. Her ultimate love and joy were her children, grandchildren and great-grandchildren as could be seen by the many photos that adorned her home.

Those who passed before her include her parents Herb and Ruth Finke, her in-laws William and Agnes Majors, and her husband Bob Majors.