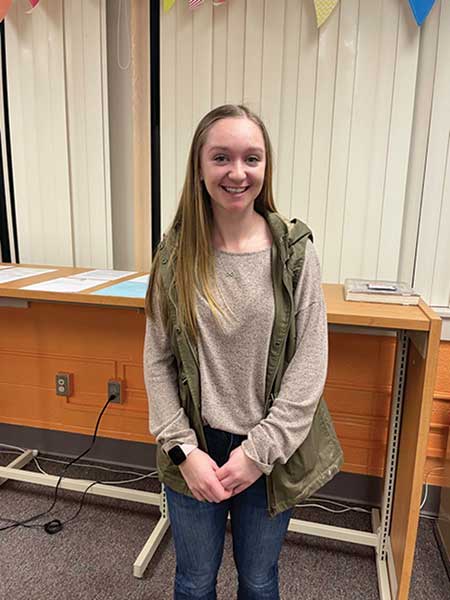 The Mabel-Canton School Board met in regular session on November 16.  All members except Mark Wiedemann were present.  The board welcomed new Student Representative Emily Carolan, a senior student at the school.  Superintendent Kuphal explained that student representatives are not voting members of the school board, but are welcomed to share their thoughts or suggestions on any topics the board discusses.

Kuphal asked Principal Michelle Wiedemann if the time commitment involved in contact tracing of any COVID-19 cases has lessened.  Principal Wiedemann replied, “Yes, it’s definitely calmed down as far as contact tracing… We still follow our seven- and 10-day quarantine periods.  Seven with close contacts, and 10 days if you were to have COVID.”  She stated that Mabel-Canton is currently making no changes to the COVID protocols in place.  Wiedemann also pointed out that Fillmore County Public Health was planning to come to the school on November 17 to offer the initial COVID vaccinations to students aged 5-11, if parents have given permission.

Regarding the health insurance offered to staff through the Southeast Service Cooperative, Kuphal explained, “We went out for a quote.  The rates came in favorable.  The teachers had to vote on it, and they did.”  But, as Kuphal explained, it was then discovered that the cooperative is in the middle of a two-year commitment with the current insurance provider, so no change midstream is allowed.

Student Representative Emily Carolan gave an update, stating, “We recently had our Veterans Day program, last Thursday.  The student council is hosting a hat day on Friday for the child in Spring Grove that was diagnosed with cancer.  National Honor Society has their giving tree up right now, it’s open to the public.”

Regarding volleyball coach Lonnie Morken, Kuphal shared that, “Lonnie was named Section One Coach of the Year, which is actually a pretty big deal… But when he’s won it so many times, it doesn’t seem like it’s that big a deal anymore.”  He said Morken has previously been named State Coach of the Year, and estimated he’s received this particular Section One honor roughly six to eight times before.  Kuphal summarized, “Congratulations to Lonnie, it IS a big deal!”

Principal Wiedemann informed the board that “Mrs. Hollar received a grant through Triple A, $1,200.  With that money, we’re going to be bringing a bike rodeo back this spring, for third and fourth graders.”  She said the event will include a field trip to Decorah, where the students can ride their bikes on the extensive trail system that runs through Decorah.

Wiedemann also updated the board on the school’s status and progress on various goals laid out as part of the “World’s Best Workforce” initiative.  She shared that although some of the 2021 goals have not yet been met, efforts are continuing to address various challenges encountered.  She stated, “Goal Four: All students are career and college ready by graduation.  We did meet this goal” based on testing of senior students.  Regarding graduation rate, the school’s goal was 100%, but Wiedemann said that target was narrowly missed, with 25 of 26 students graduating.

The board approved signing a three-year contract with SMS (School Management Services).  Kuphal explained that SMS has done the school’s payroll services, and there were no objections to continuing with SMS.  Kuphal also pointed out that this is completely separate from the financial and budgetary services provided by Business Manager Aimee Lake.

The board’s next regular meeting will be December 21.  On that evening, the board’s annual Truth in Taxation public hearing will be held, beginning at 6:01 p.m.  The regular board meeting will follow.  The public is welcome.