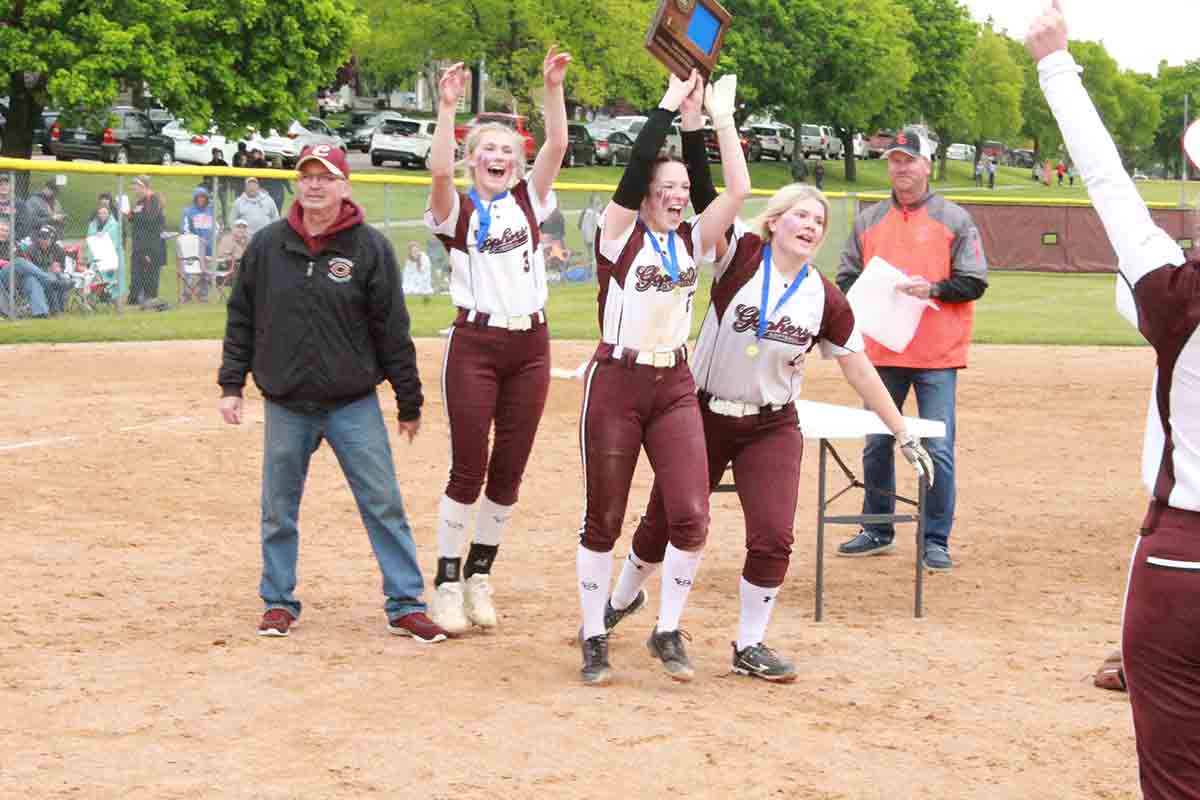 contest of the #4 Gophers (2-seed, 21-1) versus #3 St. Charles (1-seed, 19-2). The Saints’ top of the order did what they do. In the third inning, Grace Buringa singled and Makadyn Gust followed with a two-run home run for a 2-0 lead. Chatfield got one back in the fifth. A lead-off double (near home run) by Brynn Irish was followed by a ground-ball RBI-single by Brittin Ruskell. The Gophers threatened for more. Ruskell made second on a throwing error. A sac bunt moved her to third. Feared hitter Peyton Berg was then intentionally walked. With runners on first and third, a double-play ended the inning. Chatfield trailed 2-1. In the bottom of the sixth, Saint three-hole hitter Lauryn Delger hit a solo home run making it 3-1. Chatfield was down to its last at bat. But eight-hitter Irish led off with a single. Two batters later, Kara Goetzinger legged out an infield hit. Berg was again intentionally walked, loading the bases with one out. Jaiden Zimmerman then got just enough of the ball to seeing-eye it through the short-third hole. Irish and Goetzinger both scored, tying the game 3-3! Berg and Zimmerman moved to second and third on a throwing error. St. Charles then intentionally walked Claire Springer to put an every-base force out into play. Like the fifth, a double play ended the inning. Hinckley hammered a ball to second, which was caught, and the Saints got the double-off at first. It was the second time Hinckley hammered a shot that was caught, preventing an RBI-situation. It happened in Chatfield’s first with runners on the corners. St. Charles got a runner to second in their seventh, but no further. The game went to extras tied 3-3. In the Gophers eighth, the bottom of the order again came through. Four straight batters reached (with a fielder’ choice included). The bases were loaded with one out for the top. Goetzinger popped out, and not deep enough for a tag. Up stepped Berg, in a situation where an intentional walk was out of the question. Karma caught up to SC. The senior, a starter since the 8th grade, powered her biggest hit to date, a two-run single to left field. Chatfield went ahead 5-3! But the Saints (the home team cause of seed, despite the game being played in Chatfield) didn’t go quietly. They got runners to second and third with one out in the bottom of the inning. A pop-out to short put the Gophers one out away. Mia McGuire then hammered the ball to right field, but the line-drive karma that had hindered Chatfield and Hinckley twice, went the other way. Devann Clemens tracked and hauled in the shot. The Gophers had victory at hand, 5-3 in a fantastic softball game! Eight-hitter Irish had the biggest day for Chatfield (3-4, 2B, 3 R). Berg (1-2, 2 RBI, three BB’s) and Zimmerman (1-4, 2 RBI) each had big two-run hits. Ruskell (1-3, RBI) and Goetzinger (1-4, R) helped.