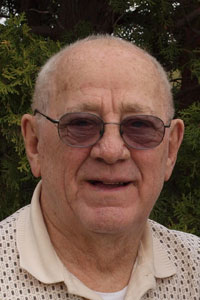 Pat was born on October 31, 1927, in Rockwell, Iowa, the son of Jack and Irene (Meehan) Fitzgerald.  Pat graduated in 1946 from Sacred Heart Academy in Rockwell, Iowa.  After graduation Pat joined the Army and went to the Philippines, where he worked in a hospital as a lab tech.  After his discharge he returned home and went to X-ray school at Mercy Hospital, where he met his wife Mary Joanne Schnurr.  They were married on June 21, 1950, and moved to Charles City, Iowa, where Pat worked in the hospital and Joanne worked in the office of Dr. Miner.

After a short time, they moved to Marengo, Iowa, where Pat worked in the hospital and Joanne worked in the surgical department.  Pat later became hospital administrator, where he met Dr. R.L. Sauer. After a few years, Dr. Sauer moved to Preston, Minn., and later asked Pat to move up to Preston.  Pat and Jo moved to Preston in 1968, where they still live.  Pat and Jo had five children: girls Deb, Patti, and Erin, and sons Mike and Kelly.  Pat loved to hunt and fish and was a darn good shot.

He is preceded in death by his parents Jack and Irene, three brothers and two sisters.

Memorial Mass will be held 10:30 Thursday, October 10, 2019, at St Columban Catholic Church in Preston, with Father McGrath officiating. Burial will take place at the Minnesota State Veterans Cemetery in Preston.  Visitation will be held from 9:30-10:30 a.m., prior to the service at the church on Thursday.