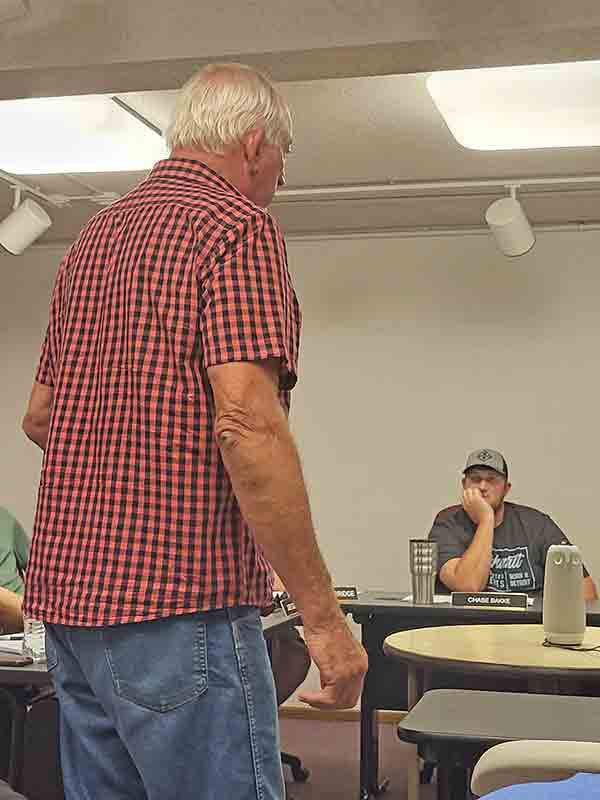 A public hearing was held at the September 7 Lanesboro City Council meeting to discuss the proposed sidewalk improvements. Lanesboro resident Anna Loney addressed the council to ask how those particular sidewalks were chosen for improvements. “I would like to distinguish whether our objective is to have a walkable community,” she said. “I’m not sure if a blanket policy is where our best future is served.” Loney noted that there are a variety of grants available from the state of Minnesota that could help create a more walkable community in Lanesboro. There were no other comments and the public hearing was closed.

A second public hearing was held to discuss the approval of the property tax abatement for Sparrow Valley Properties, LLC for their development of the old church building into apartments. There were no comments and the hearing was closed.

The regular meeting was called to order and the public comment portion of the meeting was opened. Susan Ritter asked the council why more information wasn’t available on the agenda. She stated that Robert’s Rules of Order were not being followed because there was not sufficient information on what decisions the council would be making. She also expressed dissatisfaction that the public comment section was placed ahead of the rest of the agenda items. Bonita Underbakke also spoke, stating that she has concerns about the interim use application for a mobile old west style photography business. She felt that it would contribute to harmful stereotypes of the old west, Native Americans, gangsters, pirates, etc., and would not be a benefit to Lanesboro’s welcoming atmosphere. “I believe this carnival wagon business sends conflicting messages,” she said.

Jerry Ritter stated that the new RLH Grain bin was 12.8 feet from residential property, not the required 50 feet. “Your job is to protect and take care of this city and the people in this city,” he said, citing safety and health hazards such as air and sound pollution, danger to neighborhood children, and heavy truck traffic. He felt that the city was irresponsible for allowing the new grain bin to be built. “This is a tourist community,” he said, “it is not an agricultural community.” Molly Gage also spoke out against the grain bin. “I’m here to ask the council to start doing what it’s legally obligated to do, and that’s to enforce the ordinances that keep us safe and healthy,” she said, adding that residents rely on ordinance compliance to keep them safe. Lori Bakke spoke via Zoom as a longtime Lanesboro business owner and fourth generation farmer. “This is an agricultural community,” she stated. “We are also a tourist community, but I truly believe that we can work hand in hand. I firmly believe that what Rich Horihan is doing is better for our farmers.” Greg Qualy said that living near RLH Grain has been a living hell ever since the first grain bin went up due to the noise of the truck traffic, air pollution from the grain, etc. He showed the council several pictures of Lanesboro from different angles, pointing out that the new grain bin stood out in each one due to its height. Susan Ritter asked the council to send a letter of correction to RLH Grain asking that the bins follow city ordinances and be removed from city property. “We’re living with this thing that violates city codes,” she said.

Owner of RLH Grain, Rich Horihan also addressed the council during the public comment section. He showed drawings of the new grain bin next to an existing one to the council, noting that the drawings had been presented to and approved by the city and EDA in 2021. He stated that he would not willfully and knowingly encroach on city property and had been shown where the property line was by a city employee. He didn’t feel that his business hurt tourism in Lanesboro. Horihan said that he had received a valid permit for building the new grain bin. “But we’re willing to cooperate with the city to correct encroachment problems. I don’t want any animosity with neighbors.” He noted that most of the business at the grain elevator is done during a six-to seven -week period during the fall and that truck traffic does not occur every day of the year. Horihan encouraged people who have questions about his business to come talk to him or his sons so that misunderstandings could be addressed.

The consent agenda was approved, which included accounts payable, parking spaces on Parkway for October 1 from 11 a.m. to 3 p.m., a recap of Buffalo Bill Days and a fireworks permit, a bed and breakfast license application from the Gages, a fiscal agent request for the Leadership Boost Grant Application from the Blandin Foundation, Resolution 2022-31 authorizing assessments for unpaid utility charges, and Resolution 2022-34 accepting a donation to the Lanesboro Public Library.

City Engineer Brian Malm presented pay request #21 for the wastewater treatment facility in the amount of $213,761 to the council, which they approved. Pay request #1 for the 2022 street and utility improvements in the amount of $673,345 was also approved and represents the work done from the start of the project through the end of August.

Thomas Pursell was approved as the newest member of the EDA.

A development agreement with Sparrow Valley Properties with a 4% interest rate and payments to be disbursed starting the first month after the project is completed was approved.

An annual liability coverage waiver form for the city’s property and casualty insurance was approved.

A resolution accepting assessments for sidewalk improvements was approved.

A resolution certifying the preliminary 2022-2023 budget and levy was reviewed with the understanding that the levy can always be lowered before the budget is finalized, but it can’t go higher. Council member Mindy Albrecht-Benson expressed concerns that the proposed levy has a 14% increase from last year. Council member Chase Bakke explained that while the levy is higher, the tax base is also higher. The resolution was approved.

Albrecht-Benson addressed some concerns she has about the way the council makes decisions. She felt that there was a lack of critical thinking, the council did not consider all available options, and that they were not presented with enough information to make an informed decision. She used an item from last month’s agenda as an example. Fire Chief Rob Wagner had asked the council to approve the purchase of a 2009 fire truck to replace an older truck. The council unanimously approved spending $200,000 on the new truck, which Albrecht-Benson regretted later, citing a lack of information to make an informed decision. “My concern is that looking at options was looked over,” she explained. “I’m unwilling to be presented with limited information and being asked to make decisions that way. I’m urging us a city to do better.” She made three requests of the other council members. The first was that nothing would be voted on unless all the information and options available have been reviewed by the council. The second was that the information be presented in a way that shows that all options have been considered, such as a summary sheet on each agenda item with more information and a list of options. The third request was that each council member think critically about each option before casting their vote.

Council member Joe Goetzke said that he resented using council time to lecture fellow council members. “If you feel that you don’t have enough information, ask for more,” he said. Mitchell Walbridge said that he felt that any concerns a council member brings up should be heard and at least considered. “We can take them into perspective and see what processes we can improve to make us the most effective and most thorough we can be,” he said. “We can always be evaluating the way we do things.” Chase Bakke agreed, saying, “I don’t necessarily agree with how it was presented, but I do like that you’re bringing options for us to improve.” Goetzke noted that asked the city administrator to type up a summary sheet with background information and all available options for each agenda item would burn a lot of her time. Bakke recommended that the council members ask to table items that they are not comfortable approving yet to give them more time for research. Mayor Jason Resseman agreed that that was an option. “The onus is on us to do research,” he said. “Maybe part of this is our responsibility.”

The council reviewed an interim use permit application which would allow a mobile old west style photography business unit to occupy space in the commercial district until October 31. The Historical Preservation Commission felt that it would be tacky. Mayor Resseman had seen photographs of the mobile business and also felt that it did not fit with the aesthetic of the historical district. A motion to approve the application failed.

The council discussed the property boundaries, floodplain, lot coverage, and height variance issues with RLH Grain’s new grain bin. City Attorney Joseph O’Koren cautioned the council not to make a decision based on public opinion, but to evaluate the facts using practical difficulty factors that Minnesota statute has for issuing variances and permits. The statute was put into place to prevent cities from approving or denying variances based on subjective feelings rather than objective facts. Brian Malm pointed out that encroachments onto city right-of-way occur all over town, as they do in most cities, something which would need to be taken into account. “The question is whether it’s appropriate to take action with this one,” he said. The first question of the practical difficulties factors was to determine if the grain bin was in harmony with the intent of the city ordinance on building height. A motion that said it was passed with a three-two vote. The second question asked if the variance was consistent with the city’s comprehensive plan, taking vitality, workforce, economic growth opportunities, etc, into consideration. A motion saying that it was consistent was passed unanimously. The third question asked if the property was being put to use in a reasonable manner. “I think the height is unreasonable,” Albrecht-Benson commented. Mayor Resseman disagreed, saying that it was a reasonable use for that zone. A motion was passed with a four to one vote finding it to be reasonable. The fourth question asked if there were unique circumstances to the property such as topography, dimensions, vegetation, etc. A motion saying that there were not was passed with a four to one vote. The final question asked the council to evaluate if the variance would affect the character of the property. As there are already other grain bins on the property, a unanimous motion was passed agreeing that the character was not being affected. Council member Mitchell Walbridge asked where health and safety concerns were addressed within the practical difficulties statute. O’Koren said that they are not taken into account as the factors cannot be based on particular city options.

A motion to approve the height variance request based on the five practical difficulties questions was passed with a three to two vote. The setback to property boundaries, floodplain, and lot coverage issues for RLH Grain at 18 Beacon Street were tabled.