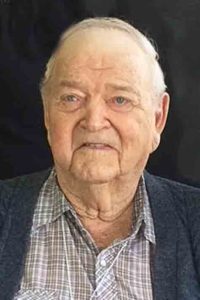 Kenneth was born August 16, 1926, in rural Lanesboro to Peter and Mamie (Lawstuen) Peterson.  He attended country schools and graduated from the Lanesboro High School in 1944.  He started working on the family farm while he was in high school and continued until 1975.  In 1952 he married Jeanette Balbach. They had eight children.  Jeanette passed away at the early age of 33.  In 1968 he married Donna Brink.  In 1975 they moved to rural Canton, where he did custom farming until retiring when he was 84.  Kenneth enjoyed buying and selling cars, playing cards, and dancing.

He was preceded in death by his first wife Jeanette, his parents Peter and Mamie, two children, Mary Lou and Diane Marie; grandson David DeSerre, a daughter-in-law, Karen Peterson; a brother, Warren (Ada) Peterson; and a sister, Delores (Gordon) Peterson

Funeral services will be 11 a.m., Saturday, December 3, 2022, at the Elstad Lutheran Church in rural Lanesboro, Minn.  Burial will be in the St. Patrick’s cemetery in Lanesboro.  Visitation will be one hour prior to services at the church.  The Mengis Funeral Home in Mabel is assisting the family with arrangements.